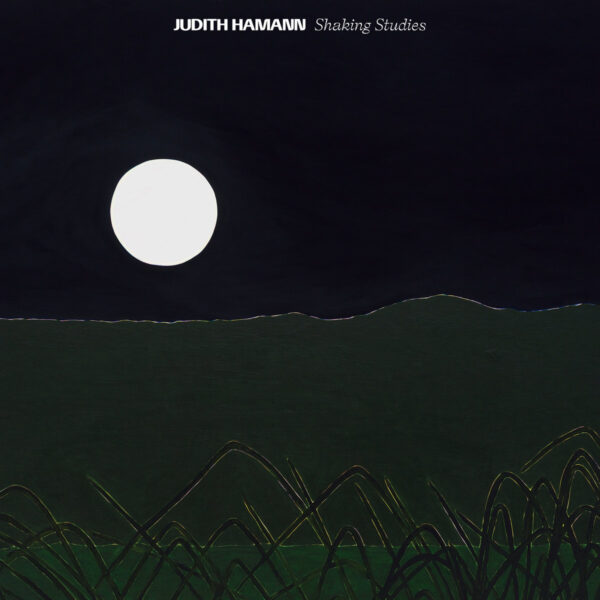 We recently noted Australian player Judith Hamann in March 2021 with her excellent Music For Cello and Humming CD – a document of her highly original performing style for the cello. We alluded to the Shaking Studies (BLANK FORMS EDITIONS BF-017) LP at that time, from the same label, and today we’re fortunate enough to have a copy of same in our clasping digits.

The CD foregrounded the use of her own humming voice in conjunction with her cello playing, but on today’s LP the whole body comes into play; the musician has evidently evolved a sophisticated form of shaking, a means of trembling her whole body, that enhances her cello playing and brings forth unusual sounds and unexpected events in the music. I suppose the centrepiece here is ‘Pulse Study’, divided into two parts over the two sides of vinyl, and delivering some 30 minutes of intense music. It’s a live performance, with tension and taut atmosphere, and exciting mixed harmonies – generated in a way which I suppose a conventional classically trained player could never reach. From what I can gather, it’s a highly controlled form of body movement which has the effect of “shaking” the instrument just so – if you see her doing it live, it seems the whole instrument pulses visibly. In turn, these movements pass back into her bowing and fingering actions, and the performance becomes one of rare sympathetic playing, a musician literally at one with her instrument, a fusion. I might add that although Judith Hamann has cultivated this unusual approach to a very refined degree – her techniques produce predictable, repeatable results – it’s done in a very instinctive and intuitive manner, not scored, not steretoyped improvising. This means, I suppose, that Shaking Studies in general and this ‘Pulse Study’ in particular, is music that is unique to her, and can only be made by this woman and this cello.

We are now quite some way from the formal experiments in harmonics made by Tony Conrad and his mathematical equations for intervals, tunings, and microtones; and the music is warmer, richer, as a result. Indeed, it is explicitly stated that Judith Hamann “rejects measurement and regularity, order and control” in her music here. Both parts of this ‘Pulse Study’ give ample evidence of the success of Hamann’s radical methods, and beautiful minimal music is the result, both compassionate and yet quite astringent – traits which I suspect are also characteristic of the woman herself, with her firm views about feminism and the territorial rights of the Jaara people of the Dja Dja Wurrung nation in Australia.

Leo Abrahams recorded this live set, and Werner Dafeldecker is credited with “additional mixing”. ‘Pulse Study’ is book-ended by two shorter but equally impressive pieces. The first of these ‘A Reading’ is cello playing enhanced to some extent with electronics; some subdued but agitated bowing work in the lower registers contrasts with higher tones, creating a nigh-unbearable tension for the listener, suggesting a difficult mental problem being patiently unravelled by a sharply-focused keen mind, until it transforms into an abstracted whine. ‘The Tender Interval’, which closes the LP, may include some outside recordings or field recordings; cello and electronics combine with this “clinking recording” supplied by Joshua Bonnetta to create a sombre nocturne, a mysterious tableau that appears to be unfolding by a riverbank. If the “shaking” method is used here, it’s not quite as evident as it is on ‘Pulse Study’, but the musician still emanates her own unique and eerie sound, as part of a coherent musical strategy.

Charlemagne Palestine said to this magazine that he considered himself “the living incarnation of his work”, and now Judith Hamann can legitimately make a similar claim for herself. Wonderful record. From 22 December 2020.