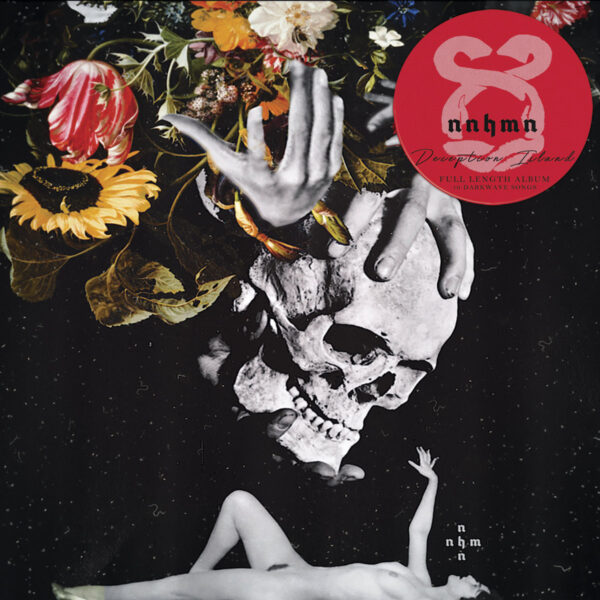 Berlin duo NNHMN have crossed our path previously with Church of No Religion and Shadow in the Dark, both released on this same label; the former made cryptic references to extreme religious sects from history, while the latter EP exhibited the musicians’ skills in the electro-pop format. On today’s item Deception Island (ZOHARUM ZOHAR 216-2) we hear more skilful pop tunes laced with very dark sensibilities; the instrumental half of the act, Michal Laudarg, performs sequences and beats with his teeth set in a grim posture, barely allowing melodic form to intrude on his stern plans, while vocalist Lee strives to make her voice appear hollow, disillusioned, drained, stricken with a strange emotionless yearning. Despite the low-key mood and vaguely morbid themes, the label are keen to stress that this is still intended as dance music and point out its various irresistible toe-tapping and head-nodding qualities. The material originally came out on vinyl on Oraculo Records in Spain, and as a CDR on Minimalkombinat in Germany. I like the simplicity of the music, and indeed sometimes wish it could be pared down even further, but even a non-participant like myself can sense this is quality material. Nice skulls and symbol-laden surreal cover artworks. German droners Troum have been active since 1998 and grew out of the dark industrial combo Maeror Tri. I find they’ve appeared on over 70 compilations over the years, besides finding time to release about 30 albums under their own name. We last heard them – sort of – when we were sent a 2018 two-disc comp of tribute recordings by other smitten bands, called Troum Transformation Tapes, an overpowering collection of droney richness. Hard-core devotees of this mysterious duo have probably already collected all the Troum singles they need, but for those who haven’t, today’s release Da-Pu-Ri-To-Jo (ZOHARUM ZOHAR 217-2) is a handy way to acquire an instant survey of 7-inch vinyl releases, sequenced onto a single CD. This isn’t intended as a comprehensive sweep of the single releases (for instance it leaves out Kapotte Muziek, their 2001 record for Korm Plastics), but it can’t fail to satisfy fans of strange and shadowy instrumental music. Impressive range and variety across this period (2004-2016) exhibited by the Troumsters, including hard-edged guitar snarls along with surreal, twisty rondellos that swirl like mist in the brain, and various states of emotional registers ranging from restless and angry to abject despair. The compilers have gone out of their way to create the experience of a “labyrinth of music” for the listener, by determinedly avoiding a strict chronological sequence. Good nightmarish material for those sleepless November nights. The Yasnaïa item is a spin-off of sorts from Hybryds, that Belgian combo of underground avant-techno music who throve in the 1990s; we’ve heard a few reissue packages from Hybryds thanks to this label, and though it’s music that’s very far from being in my line, I have found parts of it very accessible. Yasnaïa (real name Leen Smets) happens to be the vocalist of this odd troupe of players (or at least until she left in year 2000), and today’s record is published as the “extended edit” version of Oniro (ZOHARUM ZOHAR 219-2), which is her only solo album to date and which originally came out on World Serpent in 1996, as LILITH 01. Where the music of Hybryds is something I recall as very dense and overcharged with layers of rhythmical and instrumental activity, this Oniro item is much more subdued in tone, projecting a very mysterious mood, and quite minimal in its execution. It does appear to be a genuine solo effort, all vocals and samples by Yasnaïa, and in fact the musical aspects are put in the background to allow us to concentrate on her weird vocalising. Perhaps unsurprisingly, she’s in pursuit of mystical and trance states, arrived at through semi-magical ceremonies and chanting rites, an aspect which isn’t foregrounded in the more extroverted antics of Hybryds. Yasnaïa’s samples, beats and musical fragments simply sketch in the impression of a tune, building a porous framework for her possessed vocal outpourings. The approach has a lot of skill and craft, though it’ll take a few more listens for me to penetrate the miasma of alienating strangeness that surrounds this record like an aura. Her language is hard to fathom, her code impossible to crack. Devotees of ritual incantation will enjoy the second disc, which captures a live recording of Yasnaïa doing it in Munich in 1997 under the auspices of Pagan Muzak, plus there are bonus rarities sourced from vinyl and picture disks. Item with digital-morph cover artwork is by a Polish duo whose names are new to me, though they have been active since the later 1990s. The record is called [Dot] (ZOHAR 220-2), represented by printing a small white circle, and even the band name synta[xe]rror is a bit elusive with its use of square brackets somewhat suggestive of a snippet of computer code. The team of Bartosz Jakubicki and Artur Blaszczyk are showcasing their programming skills across nine tracks of computer-based music, and might be emulating music from twenty years ago – the label explicitly name-checks acts such as Gridlock and Somatic Responses, and I myself am reminded of materials from the German and Austrian schools, as represented on labels like Mego, Raster-Noton, and Mille Plateaux. However, our Polish friends have a slightly more chaotic bent, and although there may be lots of efficient sheen and precision-tooled metallic surfaces, the work is shot through with tiny explosions of unpredictable energy, creating moments of contained havoc. A lot of skill in the construction of these abstract, slightly alienating episodes, in places making them worthy successors to the hard-edge groink of Kotra. Those intrigued may wish to seek out their earlier releases Abyad (2006) and Final (2007).