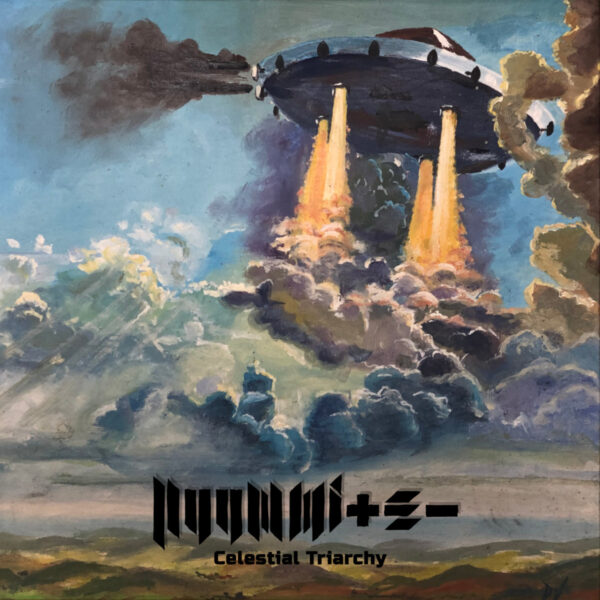 Not for the first time – and certainly not for the last! – my attention was distracted away from a million other things clamouring for its time by the stunning (if perhaps environmentally dodgy) artwork by Oldrich Dvorsky on the front cover of this, the debut album for new trio Nuummite. Coming together from the black and death metal scenes in Prague (Czech Republic), the Nuummite musicians play instrumental fusion BM / post-metal / post-rock inspired by the music of films made by Andrei Tarkovsky and Ingmar Bergman along with a mutual fascination with surrealism. At this time of review, “Celestia Triarchy” had only been released a week ago by UK label Trepanation Recordings together with two other labels but already the album is attracting much notice and positive reactions.

That Nuummite choose to play short tracks of mostly instrumental music is intriguing in itself as there’s always the danger of potential fans listening and thinking, hmmm, why do these guys insist on not having a singer or voices on every track but only on a few – guest vocalists feature on three pieces and there are snippets of voices elsewhere – as nearly every track plays as a well-structured series of riffs and lead guitar solo melodies that could support lyrics and someone to sing or chant them. There is no denying though that even on their own, the layers of music on each track generate plenty of atmosphere and emotion, and the riffs are tough, hard-edged and crunchy. The drums stir up power and energy in their rolling thunder though their sound in the mix is not heavy. The guitars are balanced between clean and gritty in their tone, and the pure lead guitar tones carry a melancholy air.

On their own the tracks are good, showing off the trio’s technical chops, but with eleven of them on one album, all sticking to a minimal instrumental palette of guitars, bass and drums, with very brief whiffs of synthesiser, field recordings or ambient music on a few tracks, the entire recording ends up sounding rather like a library-music collection of riff textures and melodies. The emotional intensity hits a plateau early and quickly and the music does not progress much beyond that. Here is where a lack of vocals across much of the album becomes telling, as lyrics and vocals, sung or spoken, will give voice (pun intended) to the emotions and moods expressed in the music and lift them to an even more intense level or channel them in another direction. Perhaps if “Celestial Triarchy” had fewer tracks and the music were less busy and compacted together, with riffs and melodies strung out to highlight the dark spaces lurking behind and between them, this debut might have become a true soundtrack of bleak emotion and mood music.