Very happy to receive these two cassette tapes from Ergo Phizmiz, a unique musical creator who I regard as one of England’s little-known geniuses…it seems a while since we were sent any product, although two highlights from the past include The Peacock, which he made for Care In The Community in 2014; and Handmade In The Monasteries of Nepal, an LP released in 2008 by Felix Kubin’s Gagarin Records label. The Peacock combined Ergo’s skill for pop-song construction with a lush quasi-psychedelic production sheen, while the latter featured an astonishing set of absurdist songs made with samples of weird mouth noises on one side, and a fantasy comic-opera ‘Eloise My Dolly’ on the flip, a slightly obsessive reading of an episode from the Chitty Chitty Bang Bang movie. I mention these just as an index to the tip of the iceberg that is Ergo Phizmiz’s swollen brain, that august organ teeming with effluvia from popular culture, and unusual ideas and notions about it all. No wonder he’s a perfect foil to the exploits of People Like Us, with whom he has produced several friendly collaborations.

On The Grand Panjandrum (SOUR ORANGE RECORDS SO009C), Phizmiz forsakes the lush production surface in favour of a much more gritty and direct style – these 20 short songs are recorded with a very basic set-up, guitars, drum machine, bass and cheap organ to accompany his sneering vocals, as if he was working on an old steam-driven TEAC PortaStudio, and the artiste comes close to reinventing himself as a contemporary version of R. Stevie Moore or Deep Freeze Mice. 1 Right from the get-go, this tape exudes distortion in the sound and abrasive qualities in the tunes, chord shapes, discordancies, and most of all the venomous singing voice. Just about every one of these songs is “disguised” as a piece of power-pop with punky edges, yet under the charm there is concealed much sarcasm, plaint, bitterness, and subversive swipes at society. Many contemporary hot topics fall under the cruel tongue of Ergo Phizmiz – the theft of our personal data by big tech companies via SmartPhone is accurately lambasted on ‘Shareholder’, and ‘The Man From Brimwood Farm’ is unsparing in its details about animal slaughter. The title track, and other songs like ‘Holocaust Denier’, address the general stupidity of the populace with a deadly combination of humour, sarcasm, and virulence – our man has several bitter pills he wishes us to swallow, but he sugar-coats every one of them in an approachable pop music radiance.

While the production may deliberately tend towards the crude, the elaborate song construction is ingenious, and the performer’s breathless style indicates how effortless he makes it sound, concealing the complexity. He doesn’t stint on craft, neither in the songwriting nor the finished recordings. Interestingly, I see that some of the lyrics were “collaged from books”, according to a throwaway credit line, which suggests than when he’s not inventing these incisive stabs at contemporary UK society (and proving a possible worthy successor to Mark E. Smith), he’s drawing inspiration from the Burroughs / Gysin cut-up method, hopefully filtered by way of David Bowie. Scrambling common sense this way is just another tool in his box to help realise his absurdist visions. He’s joined on this release by Depresstival (who might be Lottie Bowater, the multi-media creator and activist) for occasional vocal forays, and the barbed colour collage printed in nauseating colours is by Zachary Zena Giberson. 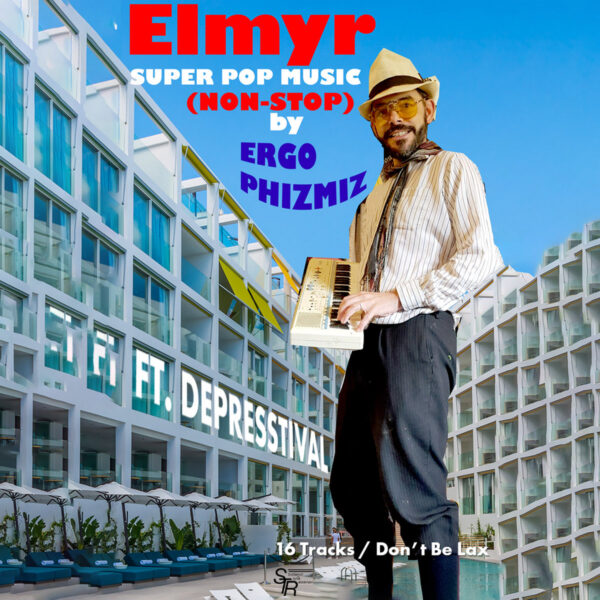 The “collage from books” method continues on Elmyr (STRATEGIC TAPE RESERVE), again featuring vocals from Depresstival. This one’s more or less cut from the same cloth as The Grand Panjandrum, but the musical style is less like DIY garage band and more like a deliberately clunky version of techno / dance music, using more keyboards and wonky synths, performed at a deathly slow pace and with all the joins showing. So far with this assessment, I guess I’m taking a cue from the press description which reads “premium avant-garde package holiday resort entertainment”, and the ridiculous cover collage which shows our man posing in front of some Anti-Ibiza nightmare and clutching a portable synth. There’s also a few vicious Spice Girls take-offs, on ‘Music For Wannabes’ and ‘The Tea Is Silent’, which in 2021 might seem an odd target at which to take aim, but there you go. This bit of celebrity-bashing aside, the targets of his bile are generally harder to discern this time, with sometimes murky and buried vocal lines, bizarre titles and scrambled lyrical content (as noted, derived from printed texts), plus the use of samples from movies to add a further twist of confusion. The abiding feeling is that this tape is the vision of one driven half-mad by the state of the sick world.

With less sugar-coating for this outing, Elmyr might seem off-putting on the surface, but in substance and execution it’s that bit more experimental and avant, pushing out into unknown areas off the map, displaying great skill and invention in the areas of tape collage, distortion, and general mind-muddling techniques used to support the lunatic plan. Depresstival’s contributions are just perfect here; while Ergo sounds by turns exaggeratedly weird, exasperated and appalled by what he sees, she opts for a cool and toneless delivery that cuts to the bone, devastating many foibles and follies with her impassive voice.