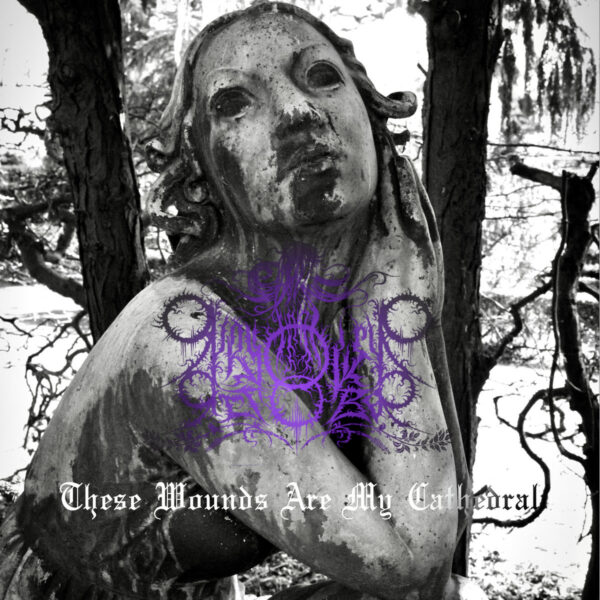 Inspired by nature, the cycle of the seasons and the pagan folklore associated with this cycle is UK atmospheric black / doom act Onryo Over October whose sole member E W Wright performs all vocals (BM and clean-toned) and plays all instruments. OOO appears to be a very new project: its debut album “Aokigahara’s Cursed and Twisted Roots” came out this time last year (September 2020) and “These Wounds Are My Cathedral” is OOO’s second album. Though just a new release at this time of review, “These Wounds …” is already attracting serious attention on social media and the reason isn’t hard to find: it’s a beautifully made work, with well-written and played songs, a clean and polished production, and a good balance of melancholy and sorrow on the one hand and on the other a tough, scathing fusion of BM, blackgaze and folk influences.

The songs on the album can be quite long and they stick to a minimal instrumental palette of guitars, synth percussion and clean background ambient effects. An early highlight is the title track for its plaintive ambient introduction and clean-toned a cappella singing which then erupt into busy blackened doom combining gruff rasping BM vocals and the cleanly sung refrain. Following track “Oathbreaker” is a tough rugged song also with duelling BM and clean vocals, and moments of sadness mixed with anger. Humanity has not fulfilled its stewardship role of Nature and its bounty and Nature will reassert itself in a new cycle of rebirth in which there may be no place for humans at all.

Individual songs are good but put together on one album they can be wearying: there is not enough variation in the music, the range of instruments used and the ambience to sustain listener attention over nearly 50 minutes of music. The singing, both BM and clean, needs to be more prominent in the mix and the clean singing, tending towards blandness on later tracks, needs more emotion. Long lead guitar soloing, padding out the songs for longer than they need to be, seems to carry most of the emotional intensity that should be in the rest of the music and the vocals. The last song “The Ballad of Persephone” seems washed out at times and lacking in energy and zest with parts going very much as if on autopilot. The album dissolves rather than ends and listeners might feel they’ve been left clinging to a very fragile ambient cliff overhanging a smooth colourless sea.