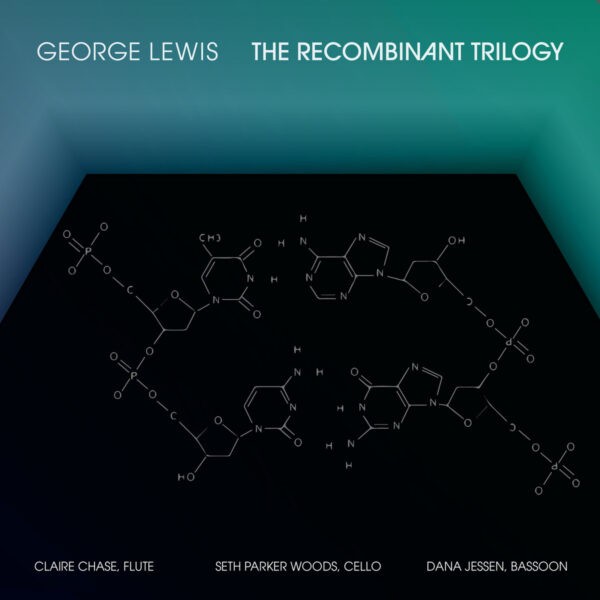 Three superb modern compositional works by George Lewis on his The Recombinant Trilogy (NEW FOCUS RECORDINGS FCR284)…Lewis is an important US jazz musician and free improviser, AACM member, and author of A Power Stronger Than Itself (definitive history of this Chicago collective) and whose trombone work has appeared on many great improv records, with Zorn, Bailey, Parker, Braxton, and many others…at this point in his career he’s now elevated to a high academic status with numerous titles, honours, and awards from assorted institutions, and this fine record allows us to see the current very refined stage of his work with computer music and live electronics.

The three pieces here are all interactive, electro-acoustic pieces, the performances by each musician transformed radically by the electronic interventions. Lewis is currently doing it with software, developed by Damon Holzborn and using the Max platform. All of these works have profound acoustic change at the heart, and unpredictability is also a factor, but the music is subtle and precise; Lewis is not interested in noisy, formless chaos. The collaborative musicians here are Claire Chase, on flute; Seth Parker Woods, on cello; and Dana Jessen, on bassoon. The cello piece ‘Not Alone’ is exceptionally interesting, not just for the exciting music on offer; it’s dedicated to Abdul Wadud, an obscure player from the Black Artists Group in St Louis who made a 1977 solo LP which has clearly made an impression on Lewis, and he regards it as “a landmark in the expansion of the expressive quality of the cello”. This particular piece demonstrates the “multiple…created sonic personalities” that Lewis is aiming for, such that Parker Woods effectively sounds like an entire ensemble all by himself, with these unexpected alignments of wild lines and daring swoops.

Equally thrilling is ‘Seismologic’ played by Jessen, who brings her own range of extended techniques to the performance, resulting in wholly unexpected sonic effects, detailed by Lewis with evident relish…he hears foghorns, wind effects, waves, storms, and the very vivid “flock of alien geese” in her superb playing. The recombinant electronics in this case create a aural “house of mirrors”, doubling and redoubling her efforts. The entire set demonstrates masterful and bold compositional skills, first-class performances from the players, and tremendous restraint and subtlety in the use of the electronic effects. We’re a long way now from when Stan Getz first applied an echoplex unit to his saxophone (Another World, Columbia 1978)…highly recommended. From 9th February 2021.