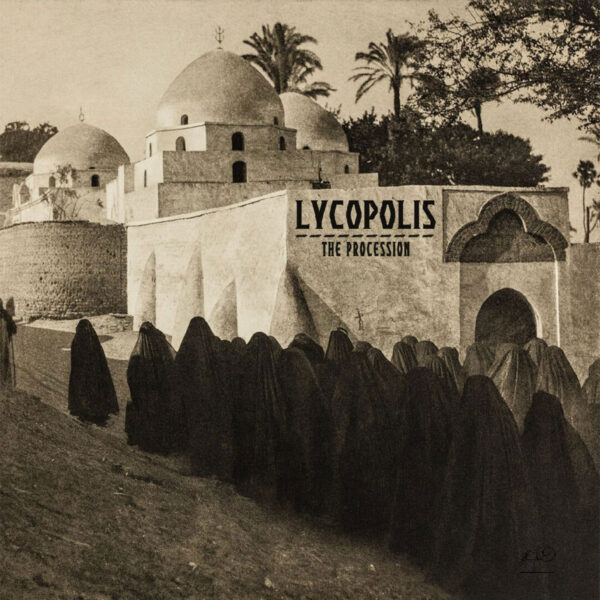 If this band with the raw and savage sound and style were from North America or Europe, its debut album might already be hailed as a top contender for best BM debut for 2021, let alone challenge for a place among the best BM album releases for 2021. Hailing from Asyut, a regional city nearly 400 km south of Cairo, being Egyptian and coming from a regional city in one of Egypt’s poorer regions might count against Lycopolis achieving success outside its homeland … but then the music of this mystery act (I’m not sure if it’s a group or a solo act) wouldn’t be what it is: a sinuous and serpentine bastard creature born of icy black metal and Arab / Egyptian musical scales and structures with a heady if evil sound, leaving in its wake an atmosphere of stifling desert-heat oppression. Prior to this album, Lycopolis had a few, much shorter releases in 2019 and 2020 so while its potential was always present, it was (shall we say) tucked under a smouldering, not burning, bush.

The album opens in great style with a thumping bass solo introduction leading into a raw lead guitar solo melody that curls and winds itself around the bass and pounding cymbals on “Upland”. From there the album proper erupts in wallpaper-stripping melodic raw BM with thrashing percussion flagellation and scrabbling trash tremolo guitars. Starting with “Tamarisk” and continuing all the way through, the music emphasises sets of repeating Middle Eastern melodic patterns among more conventional BM blast-beats in all songs. Far back in the mix are the harsh shrieky vocals, the weakest in Lycopolis’s satchel of sonic weaponry, but so strong and distinctive is the music, and so heady is the sense of repressed feeling, that the singing, covering Ancient Egyptian mythology, occult traditions and history, and shrouded in a shadow veil, can occasionally be ignored.

There are so many songs with catchy melodies that selecting favourites becomes a matter of personal preference. “Pernu” unexpectedly turns out to be great rock’n’roll track with a hypnotic riff while “Uraeus” is a rugged abrasive chugger of a song with an unexpected sinuous counter riff. “The Power of the Two Lands” is a mesmerising piece of instrumental noodling featuring harsh chainsaw riffing and a slightly softer but perhaps even more malevolent melody on psych-trance lead guitar.

Later songs keep piling on the riffs and the smashing of cymbals, and the album could be accused of overkill with more riffs than a raw BM album should be allowed to have, especially when the music is so savage and its sound so raw that after a couple of spins most listeners need to see their doctors to complain of punctured and bleeding eardrums. Closing track “What Goes Up from the Horizon” departs a little from previous songs with a riff that gradually builds more sonic and atmospheric layers into a dense cacophony of screaming sandstorm vocals, rapid-fire six-string scrabble and shred, muscular bass and that relentless sheet-metal bashing.

Some folks may complain the sound is much too raw and there might be something to be said for having a cleaner, clearer production on future recordings as Lycopolis matures and develops its style and themes. Songs are simple and short, each based around a small set of distinctive Middle Eastern-styled riffs and melodies, and at this stage in Lycopolis’s career, I think this approach together with the abrasive sound and the lo-fi production suits the band for another couple of albums.