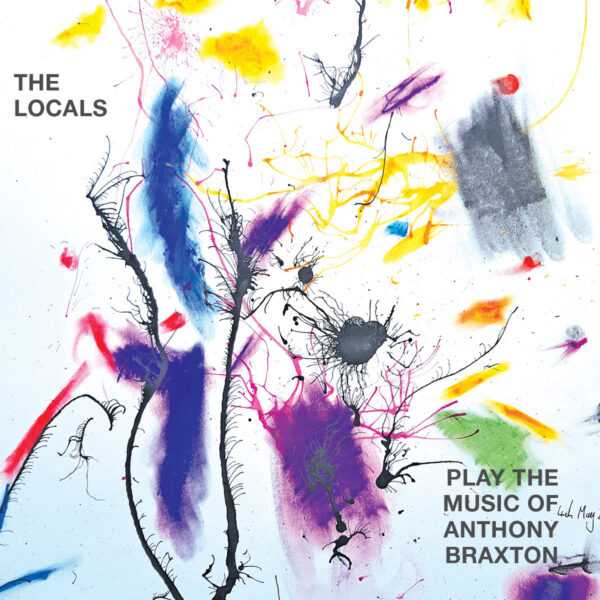 Pat Thomas is a London-based all-rounder skilled in the arts of jazz, improvisation, rock and free playing in whatever context he might be called upon…his career is dotted with many team-ups with great English players, including Lol Coxhill, Derek Bailey, Paul Hession, Tony Oxley, Phil Minton, Charles Hayward, and many more. Here he is with a combo called The Locals, and on Play The Music Of Anthony Braxton (DISCUS MUSIC DISCUS 103CD) these five UK stalwarts perform lively and inventive interpretations of the music of this great Afro-American jazzer and composer. They did it live in 2006 at a festival in Ulrichsberg, Pat Thomas did the arrangements for these six pieces (all of them drawn from Braxton’s early work) and they are represented both by the alpha-numeric titles that Braxton has made his own, and by the graphical scores which are reproduced (postage-stamp size) inside the CD wallet.

What with the electric guitar of Evan Thomas, the electric bass guitar of Dominic Lash and the drumming of Darren Hasson-Davis, this is almost a rock combo at work, unleashing rhythmical fire in the service of these avant-garde themes, and the searing lead lines of Evan Thomas in particular are heavily inflected with rock and funk moves (not too far apart from Reggie Lucas on those mid-1970s Miles Davis sets). But the piano of Pat Thomas draws us back into jazz-esque territory, as he weaves his way freely around these solid backbeats to execute many wild Cecil Taylor hi-energy runs of block chords and astringent mismatched notes that fans of Monk can savour. Indeed his stabby work on the old 88 is so inspiring here it makes me think I need to delve deeper into his catalogue in search of more examples of his stirling pianistic work. Also here is Alex Ward, with his swooping and squealy clarinet, not exactly blowing like an Archie Shepp or an Eric Dolphy but rather hewing close to the beat and bringing a kind of joyous Dixieland stomp vibe to the tunes. If I were more of a Braxton expert, I might be able to discourse on how these Pat Thomas interpretations compare to the composer’s originals, or how they measure against his intentions, but we can trust Thomas to turn in an honest day’s work with no flim-flam or conceit. Plus, I’d like to think the great man’s compositions are both sufficiently robust and open-ended to accommodate any number of free-spirited and oblique viewpoints.

All these performances have verve and spirit, but I will single out their take on ‘Composition 23g’ which showcases Pat Thomas’ melodica work for added craziness, and there are other outer-limits spookoid sounds from the band that defy categorisation. With its steady bass backbone, this one is where The Locals come close to emulating Sun Ra and The Arkestra around the time of Lanquidity. A fine blasteroo. Oddly enough no photos of the band save Pat Thomas on the covers; six panel digipak is instead to devoted to Mark Browne’s colourful abstract paintings, and photographs of Braxton himself at various stages of his illustrious career, looking especially formidable holding his contrabass clarinet aloft while wearing his typical cardigan. Some may find the music of Braxton pretty formidable too, what with its complexity and sensibilities that owe as much to Stockhausen as free jazz, but this record might just allow those listeners to find a way in. From 22nd February 2021.