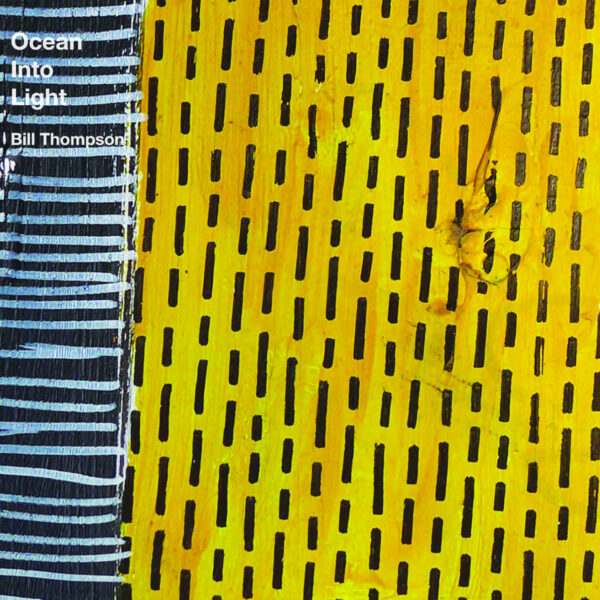 Last heard from American player Bill Thompson with his powerful and dramatic (all expressed in a minimal way, of course) Blackout record, where he staged a ritual destruction of his collection of digital sound files, producing sound art from the event as he slowly deleted his way through many a megabyte. But he’s back on the moog guitar, his trusty device, with today’s release Ocean Into Light (BURNING HARPSICHORD RECORDS BHR006). 51:48 mins of intense drone music assembled at a London studio.

Though “minimalism” might be a valid tag to help us understand Thompson’s work, he’s not simply a process composer working through stale formulae, rather he’s a real-time living breathing performer – and it’s this side of his personality that’s muchly to the fore on this solid piece of work. With the addition of live electronics and found objects to the moog guitar, there is a substantial amount of sonic and musical information packed into the ether when he opens a new session, and for the opening moments of Ocean Into Light one might almost be tempted to clutch for some post-psychedelic metaphor to account for the sunlit riches and mind-altering colourscapes that pour forth over the eyelids in generous scads. With this being a performed piece, it does change (slowly, and intuitively) over time to settle down into a peaceful meditational drone where the listener can not only feel safe and serene, but also engage the mind in solving cryptograms and puzzles. Indeed Thompson himself, never relaxing his concentration or losing focus for the entire hour, seems to be to be working through something difficult himself, a knotty crossroads or perplexing dead end, and he patiently whittles away at the dilemma with the sharp mind of a crossword solver.

Much as one likes Eleh’s extreme and sumptuous drones, he sometimes can appear aloof and mystical, reserving his music for forces which dwell on a higher plane; Bill Thompson however is a very human player, and the muscles and sinews of his music exhibit a strong presence on this beautiful record. From 16th February 2021.