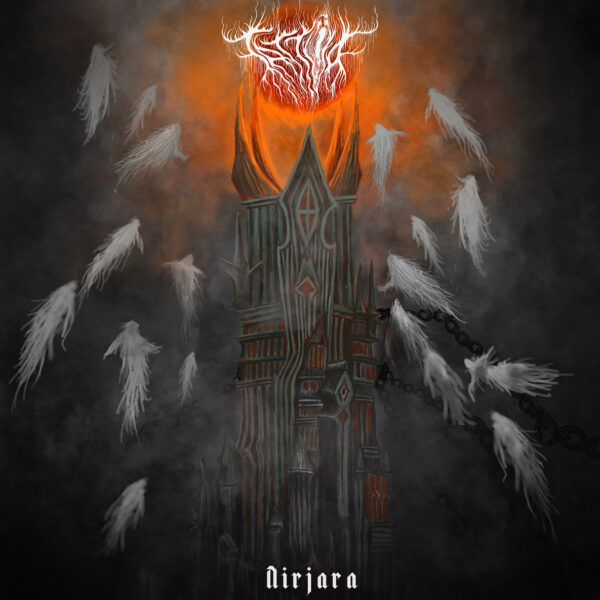 In the philosophy of Jainism, an ancient religion from the Indian subcontinent with very distinct beliefs and cosmology, some but not all of which may overlap with Hindu and Buddhist teachings, the concept of tattva refers to truth or reality and constitutes a principle necessary for a soul to achieve salvation. There are seven tattva principles and one of these is nirjara, the separation / shedding / removal of accumulated karma from the soul. If a soul is to be liberated from endless cycles of birth / death / rebirth, nirjara is necessary and can be achieved either by attrition (when karma wears away once its consequences have worked themselves out, in which case no effort on the soul’s part is needed) or by the soul doing some form of penance to remove the karma. These concepts find fertile musical soil in the realm of black metal, a music form much given to philosophical self-reflection and ontological questing (erm), at least in France anyway from which one-man BM act Tattva hails. Sole member J plays all instruments and performs all vocals on “Nirjara”, Tattva’s debut album after a couple of small releases. As might be expected then, “Nirjara” revolves around a personal journey towards self-discovery and transformation that necessarily includes the destruction of accumulated karma, both conscious and unconscious, and which enables the protagonist to escape the endless cycle of birth, death and rebirth. Prospective listeners can predict what that means: an intensely emotional and confronting ride through dark, tough and aggressive blackened death / doom metal, heavy and hard-going for the most part, hugely cathartic and full of darkness, rage and moments of light and hope! Who’s ready for this particular stroll in the park?

Opening with an ominous background of chants and groans from a hellish dimension close and connected to our material plane, the album quickly hits its stride with rapid-fire death metal blast-beat synth drumming and massive crunchy riffs in intro track “In the Name of Nothing”. While much of Tatttva’s style is derived from familiar second-wave 1990s BM, the sound is also surprisingly clear with quite a lot of space within this song. “In the Name …” turns out to be a bit deceptive: the songs that immediately follow are heavy, depressive blackened doom songs of bleak hopelessness and desolation. J’s harsh bloodcurdling vocals fit well into this soundscape, at once recognisable and yet very different from other black metal and blackened death recordings: stark and brooding, haunting and hypnotic, with intimations of a vision of vast sprawling sonic worlds of red and black landscapes. The songs do not fit conventional song structures but sometimes, as in “Reversed Birth”, take the form of dialogue between duelling sets of vocals or follow a path directed by the lyrics. The music though always stresses melody, and sometimes very distinct melody as on the slow, almost crusty sludge-doom track “Rage”.

After “Rage”, the music does become something of an endurance test and the hoarse vocals can be wearying. There might be something to be said for editing for length and for the climax to come sooner – but karma takes its own time to dissipate and a valuable lesson must take deep root through sheer length of exposure if salvation is to be achieved. The album’s theme and narrative do not allow for pause or diversions away from the powerful music; there is not even any space for brief cold-ambient interludes in which all you can hear is the sigh of air in a vast black space. At this point in the album, with the more doomy elements out of the way and the clicky programmed percussion making its return, the music with its precision, the sharp turns and twists, the confrontational stance and progress towards climactic realisation and transformation, might invite some comparison with French compatriots Deathspell Omega.

You might not play the album very often (unless you enjoy punishment) but when you do, you will marvel that in sound, subject matter and song composition, “Nirjara” is a very rich work indeed. The ironic thing about this album, given its theme and Tattva’s aims, is that it might generate its own considerable karma in the form of listener expectations for the follow-up album – karma that Tattva won’t be able to escape!