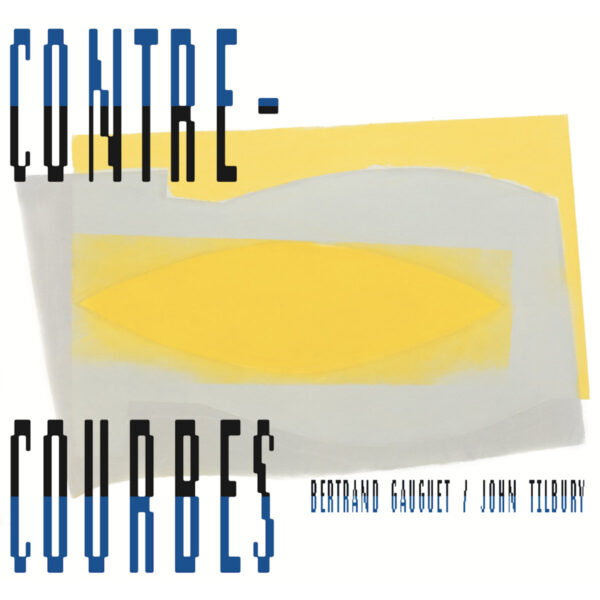 Double-disc set of restrained, subdued, quiet and slow acoustic music from Bertrand Gauguet and John Tilbury, on their Contre-Courbes (AKOUSIS RECORDS AK002) set. Both pieces recorded in France, in 2016 and 2019, and released by the new French label Akousis Records, which has been running out of Saint-Denis since 2020.

Betrand Gauguet is a fine French alto saxman who we have heard blowing as one third of NEF, and on the intense fogged-up Close Up record (with Thomas Lehn and Franz Hautzinger). He also recently played on Spectre with Xavier Charles, sometimes in an amplified way, often producing overtones; as fate would have it, that was the first release on the label. His performances here do showcase some occasional instances of extended technique, if you like, but Gauguet really underplays on both sets, barely daring to call attention to himself, offering just the right degree of contribution. Certain high-pitched whine moments are so refined and controlled they seem to be more like feedback occurring naturally in the room, rather than performed music. On the piano, Tilbury exhibits a familiar blend of magisterial command mixed with incredible modesty, and every statement that emerges from a small number of keys and just a few well-chosen notes seems to contain much compacted wisdom. Tilbury also seems to occupy some rare place in contemporary music that is somehow “beyond” most of what we understand to be either free improvisation, or the modern composition of his beloved Morton Feldman.

Although the press notes promise us “sometimes tempestuous” music, I would say we’re quite some way from the clashing noise-fests that AMM have been known to trade in during their long and complex existence, and you won’t find that many extremes of volume or dynamics on this record. However, this tends to make it all the more accessible somehow; if the listener can acclimatise oneself to its slow pace, where the dividends drop slowly from the skies rather than reveal themselves instantly, I daresay you will find much to savour in its meditational spaces, and enjoy a tranquil sojourn undisturbed by dramatic thunder or sudden outbursts. There’s also just enough “cryptic” content to keep you intrigued, waiting until we can peer around the next imaginary corner, although admittedly these corners are not familiar bricks-and-mortar on your neighbourhood High Street, and the space we’re in resembles a white-walled four-dimensional art gallery, sealed off with cotton wool everywhere, with windows perched in unexpected locations.

The label take some pride in their partnership with Atelier ter Bekke & Behage, who do the graphic design for the covers, and the artists Pierre Mabille and Guillaume Dégé. Very good. From 16th February 2021.