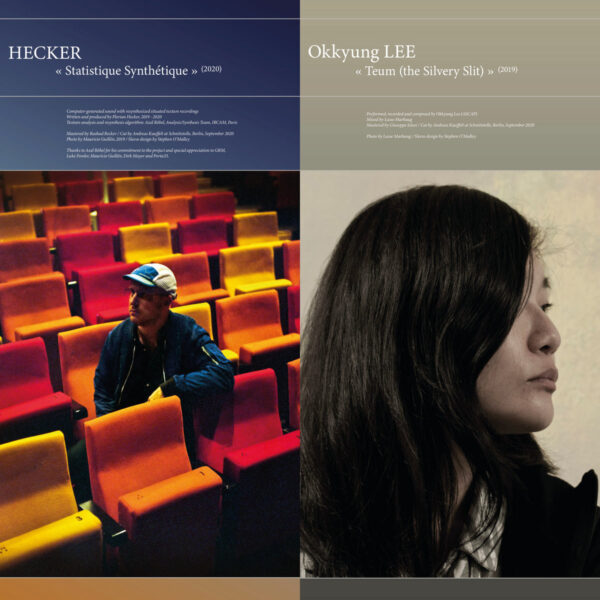 Another entry in the Portraits GRM series, of which previous entries we have noted are Shutting Down Here by Jim O’Rourke, and the Lucy Railton / Max Eilbacher split. Today’s item (SPGRM 003) is another split featuring Florian Hecker and Okkyung Lee.

Hecker’s side is a single 25:15 piece called ‘Statistique Synthétique’, a remarkable piece of computer-based music…Hecker has turned in some very bold experiments in the fields of synthesis, sound art, and installations for many years now…personally I’m still reeling from the impact of Acid In The Style of David Tudor, and that’s from 2009, to say nothing of the overpowering Kanal GENDYN with Russell Haswell, and there were also the abstruse Chimerization projects from Mego. If there’s a pattern in his work, it might be something to do with increased complexity and diversity of source materials, and extreme treatments of same, leading to ever more dense results. That’s a valid summary of ‘Statistique Synthétique’, a piece where the main elements seem to be field recordings and computer-based sound synthesis, rendered with multiple layerings and intensive processing, and creating screes of sonic information that are extremely hard to process, not least because they seem to be rushing past us at tremendous speed. Hecker’s been aided in this instance by Axel Röbel from the technical team at IRCAM, suggesting that our German-Viennese friend has been allowed access to the expensive toys at that hallowed institution; also indicating the general plan of these Portraits GRM projects to express a certain continuity between the methods of the past with contemporary approaches.

Hecker doesn’t disappoint with his through-composed result; at no point are the machines on auto-pilot, and he guides us expertly through its remorseless incremental intensity. Another collaborator has been Luke Fowler, who supplied some brief segments of the source recordings. Part of Hecker’s plan is is to induce some form of hallucinatory state; the press notes allude to a point where “object and perception dissolve into each other”, and reinforce the concept with an allusion to the paintings of Cezanne. Phew. Certainly, the resulting suite of sound – evidently assembled mosaic style from a lot of diverse materials and processes – succeeds in reaching a very advanced form of total abstraction, yet somehow we can sense it isn’t purely created from electronic / synthetic sources…to put it another way, there are trees and water and ducks in here somewhere, but the transformations are fundamental, and have resulted in a work of remarkable strangeness and power.

Okkyung Lee is that genius Korean cellist whose Ghil album from 2012 is but one benchmark of her exceptional genius in improvising / performing on that instrument, creating sounds never heard before and reaching forms of expression that few can manage. Her side of this LP is titled ‘Teum (The Silvery Slit)’, and though I can’t find an explicit cello credit anywhere, I’ll stick out my neck and assume this 2019 composition is a recording of her creating her trademark ghost-like vapours and deep stirrings, creating phenomenal sounds that are exceptionally beautiful hovering in this twilight between music and noise, often so naturally-formed as to somehow transcend performance. The press notes here reach for metaphors of tectonic plates, thunderstorms, and telluric forces, but these seem to me rather violent and extreme similes, and may not be quite right if we need to account for the subtlety of Lee’s music. Powerful energies are certainly conveyed, but she does it with grace and lightness of touch; one can almost perceive an impassive face at work, in full control of the writhing snakes she keeps caged in her private menagerie, while both Professor Challenger and Captain Nemo stand trembling in fear of their lives.

Unlike the A side, which is an impressive demonstration of computer technology and Hecker’s mastery of the tools, this piece is mostly acoustic (I assume) and leaves us face-to-face with the raw talent of a singular performer, unspooling a tense and quietly dramatic episode in 20:03 mins, admittedly with the added recording skills of simpatico technician Lasse Marhaug, who has worked with her before. Also, unlike Hecker, Okkyung Lee is not trying to impart a hallucination through abstraction, rather she presents us with the raw, uncut truth though her unvarnished statements. From 7th January 2021.