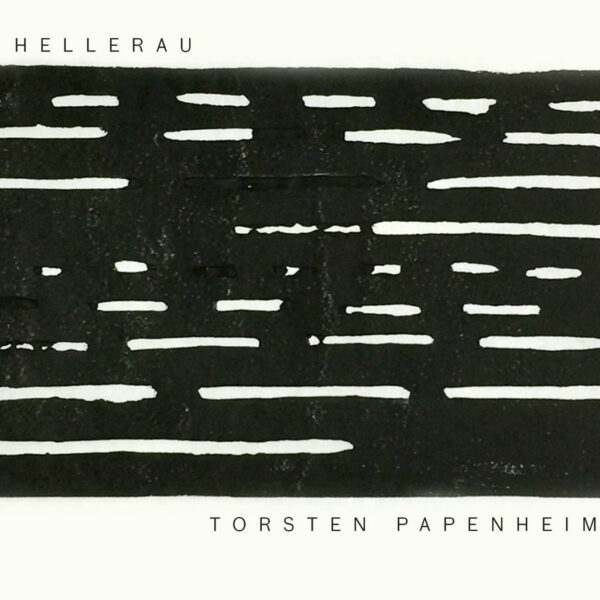 Torsten Papenheim from Berlin arrives with his set of compositions on album called Hellerau (CREATIVE SOURCES RECORDINGS CS 694 CD). This fellow certainly keeps me guessing – for a while I only understood him as a very unusual and somewhat extreme guitarist with his systems-y set-ups like on Tracking/Racking, but then along comes the Tru Cargo Service album with his intricate, poised and elliptical compositions by Torsten which really wrong-footed this listener (in a good way), seeming to insert all manner of subversive twists into something that resembled a standard jazz format.

It didn’t hurt that he had topnotch musicians at his disposal to realise that project, and same applies to the five pieces here – three of them in the ‘Nachtprogramm’ series and two of them labelled ‘Syntax’. Right there you notice the use of specific terms that aren’t a million miles away from computer-programming; this isn’t computer music, of course, but one wonders if there’s an analogue to the compartmentalised brain of our Papenheimish man and his organisational skills. The three Nachtprogramm pieces are all played by the trio of Matthias Muche on trombone, Achim Tang on double bass, and Philip Zoubek on piano – possibly a prepared one, as he clonks in audibly with some very dampened percussive blows. These three ditties have a unique and indefinable forward motion that is very compelling – it would take all the skills of an Eadweard Muybridge and his cameras to capture the clops and loping stroll of these remarkable jaunts. It’s as though three acrobats went out for a stroll by the Seine with their umbrellas and Indian clubs, and hi-jinks ensued by the time they reached Pont Alexandre III. At one level you could convince yourself you’re hearing the trombonist playing “solos” against the “rhythm section” of a bass and piano, but that doesn’t begin to account for the detailed pointilliste telepathy shared by the trio, as they hit their marks with the assurance of veteran stage actors in an Edward Albee drama. Likewise, the labyrinthine structure of these melodies contains enough musical puzzle-pieces to baffle the mind of eight professors from La Sorbonne (since we’re still in Paris).

As to the Syntax operas, we have ‘Syntax A’ performed by the duo of Johannes Tröndle on the violoncello and Axel Haller on bass, and this one’s a solemn dirge of long-sustained lower-register notes delineating the rough surface of a strange concrete tower, whose origin and purpose remains a mystery. I for one am very pleased to see this concise and clear-headed take on the whole “minimalism” thing, making strong observations about form and duration in a clipped, no-nonsense manner, and doing it in just 9:11 mins (instead of 23 hours). In terms of planning and execution, this monolithic moaner wins the golden “arc de triomphe” trophy. ‘Syntax B’ is also placed firmly in this unsmiling deadly-serious arrondissement, with long notes of growly menace parped by Elena Kakaliagou on her French Horn and audibly wearing a black outfit and mascara for the sesh, while Evi Filippou’s percussion strikes the very chime of Hellish doom. It’s probably not exactly what the composer intended, but I hear this music as a gem of slowly impending disaster delivered by two of the three Fates. It’s an index of Torsten Papenheim’s warped sense of humour that he sequences the album to alternate between these two very different moods, one of them jolly and entertaining (though played out in zany, halting rhythms), the other sombre and close-lipped.

Papenheim also did the cover artwork, which in keeping with our Parisian theme may represent the surface of the Seine at night, or a view from the Metro train as it leaves Maubert-Mutualité. From 11 March 2021.