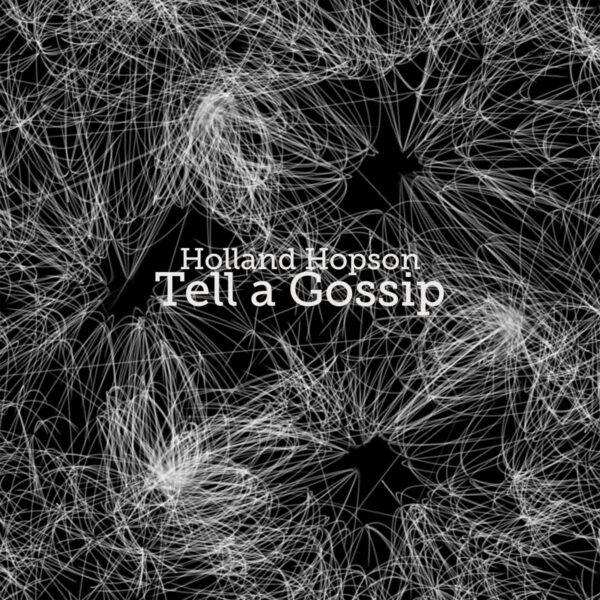 None too dissimilar from our previous entrant Niewte, where avant folk found itself in a post-glitch dimension, the experimental mix ‘n’ matching of contempo with traddist concerns continues with Tell a Gossip: Holland Hopson‘s sixth solo release to date. He’s a U.S. sound artist/composer and improvisor who’s been active on the local/national avant garde scene for the last two decades, with albums such as Post & Beam, One 4 One, and With Hidden Noises and Maps. His default set-up has, in the main, been claw-hammered banjo that comes tied in with sundry electronic treatments. For those ignorant in these matters, (including yours truly a short while ago…) ‘The Claw-Hammer Technique’ involves the player using the back of his/her index and middle fingernails. regrettably, Uncle Don’s lyrics to “Orange Claw Hammer” failed to reveal any further clues….

However, for …Gossip, the mutant banjo has been put on ice by the introduction of a customized electric guitar/banjo hybrid, built by Jefferson Pitcher of ‘Pitcher Guitars’. Frustratingly, both …Gossip’s sleeve and P.G.’s website neglect to show this axe in all of its glory. So, one’s imagination will have to come into play instead… Holland’s Appalachian banjo techniques are retained as expected, but now surf on waves of delay processing and the sustain qualities inherent in the electric six-string. We’ve certainly come a long way since, say, John Martyn hitched up his trusty Yamaha acoustic to an echoplex and took that first step into inner space. Innovations in sound tech whizz by in an indecent blur, but this advocate of ‘back porch digital’ is more than comfortable with all that this entails and on pieces like the eerie “Gravity Clocks” and the decidedly anti-melodic strains of “Bluestone”, in which sustain is set on infinity, we see an artist who is never tempted to overdo things, compositionally speaking. Pratfalls like that occur way too often.

But… on an occasion when we stumble on an Achim Reichel and Clive Palmer duo recital that’s overseen by Terry Riley….now that’s very rare. Who saw that coming?