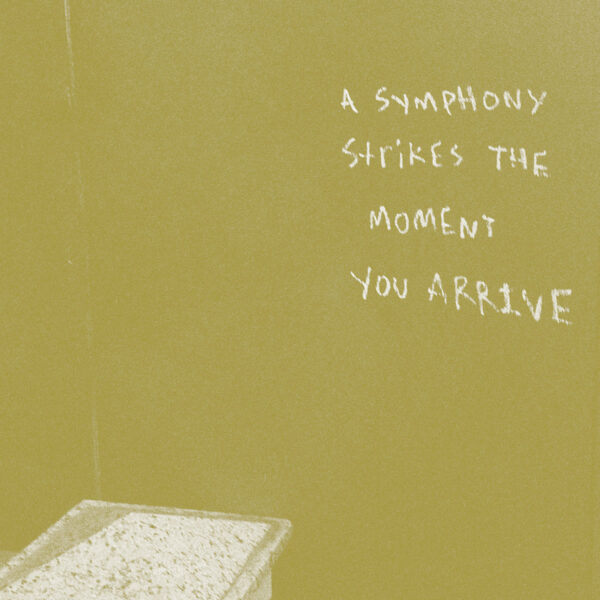 Fine blast from Alan Licht on his A Symphony Strikes The Moment You Arrive (ROOM 40 RM4134), issued in form of a limited edition cassette…we have perhaps in the past tended to focus on this American’s guitar playing which arrives in improvisational contexts and with a recent-ish set of duets with highly skilled polymath Henry Kaiser, but this item showcases Licht as a very capable “sound art / noise” guy, and emphasises his interest in the power of sound to “transform”.

The title track on the A side serves up 18:10 mins of an intense barrage all generated using a short-wave radio set. It was recorded in 2008 by Keith Fullerton Whitman, himself no stranger to room-filling electronic sound creation, in a place called PA’s Lounge in Cambridge Massachusetts. Alan Licht’s account of the occasion is interesting for the way he drops a lot of names of other prominent performers and friends, sketching in glimpses of the exciting Cambridge “scene”, including bands like Major Stars and his own Love Child, and any scraps of news arising from the Twisted Village culture are always welcome – Licht reminds us that he was playing on the same stage occupied by Crystallized Movements 20 years ago. However, he gives no clues as to how he generated this intense wall of malarkey from his radio set, nor is he quite clear himself as to why he even did it, what his motives may have been. “The radio belonged to my partner,” is all he can tell us. I heartily approve of such spontaneous, unplanned acts of creativity, and the messy, splurgy results are a pure delight. Distorted voices and fragments of the airwaves may surface now and again, but they are a mere subtext to the force-field of solid textured hum-and-roar sounds that the Lichtster pushes out into the room as he twists his knobs. There may be some added reverb effect, unless that’s just in the nature of the acoustics of this venue, which I hope was of the small and intimate variety. I like this Symphony – much more “listenable” than your standard Merzbow / wall of noise / harsh blast power-box assault, and it has a warmth in the performance (if we can call it that), much less cerebral or pre-planned than some examples of sound art which are more “considered”. Let’s hope he sees fit to overload them circuits another day and that Whitman, or equivalent figure, is on hand to document same.

The B side ‘Room For Storms’ is somewhat related – dating from 2012, it takes us back to Licht as a guitarist, but the piece does emerge as a form of sound art with its treatments and distortions, and there’s a radio / weather report subtext which kinda links it to the flip side. Birgit Rathsmann had a video piece for which she wanted a live accompaniment, and she asked Alan L. to do it – the results went down in NYC at a place called East River Park Bandshell. Birgit made use of images of hurricanes traversing the globe picked up from satellite footage, which I assume must have resulted in fairly powerful images of natural energy at work. In sympathy, Licht summons up a teeming mass of complex, very dense, sound, where occasional guitar lines, drones, root chords and suchlike sometimes find their way out of the damp cloudy eruptions. At 15:42, this single piece also demonstrates the creator’s interest in long-form duration (he has long been a champion of minimalist music in all its forms). My promo CDR includes shorter “radio edits” of both pieces, both weighing in at 5 mins apiece, which if heard do give a deal more focus to the essential message, but if you want the full psychic magoo smeared on your carcass, you need to experience these delirious sprawls in their entirety. Fine item! From 30th March 2021.