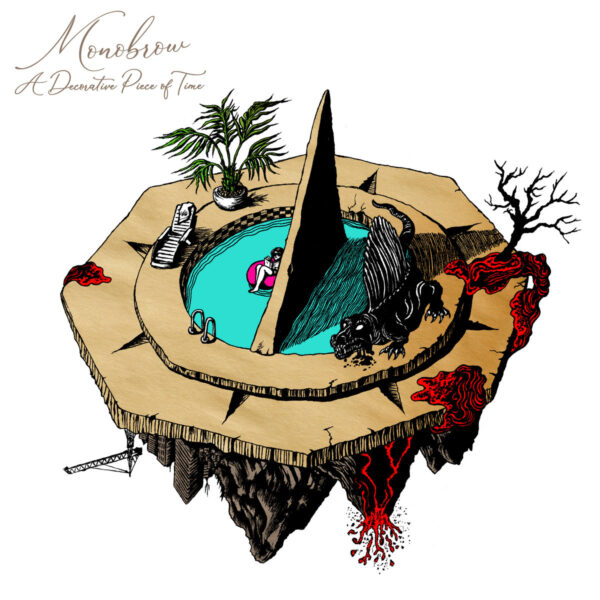 A stoner doom threesome from Ottawa, Monobrow like doing things their own individual way: coming together in 2009, the musicians have opted to release albums and other recordings independently in digital or vinyl format at a steady rate. “A Decorative Piece of Time” is the trio’s fifth album and the first studio release since 2017. I had heard the previous album “The Nacarat” then and that was a good solid recording of psych stoner doom rock with a sci-fi theme though the music is all instrumental. The sound on that album is clear and bright and the mood fairly positive. “A Decorative Piece of Time” is a tougher and grittier album with a more ominous and raw sound and a dark outlook, responding to the pandemic times we now live in and emphasising a distinct mood or atmosphere with a sparing use of keyboard-based ambient effects.

After a short droning slow-burn intro in “Epoch (t0)”, savouring the guitar’s furry texture amid a background of stealthy acid-guitar melody and creamy analog synth tone, the trio get down to business in “Argument (w)”, a headbanging rock-out of bashing drums, burning guitar corrosion, lead guitar escaping its leash and zooming into the high firmament, and unexpected insertions of meditative acoustic six-stringed quietude. Stoner rock and psych doom alternate with fragile acoustic rock, post-metal and even elements of jazz to form an epic work of meandering instrumental jam. The tracks that follow expand on this template of experimental hybrid stoner rock / psych doom / dark ambient / post-metal to explore the musical and atmospheric possibilities that open up, and take Monobrow very far indeed into realms of noirish urban blues doom metal far beyond stoner rock dreams. “Ascension …” alone takes the listener into little worlds of trippy space in amongst explosions of heavy frizzly-fuzz doom riffing and sinister lead guitar soloing, and if it were longer it could be a mini-album in its own right. “Drag (N1)” is more solidly doom even as Monobrow deconstruct the song into its constituent essentials.

We arrive at the last couple of songs starting with “Inclination (i)” sounding for the most part like a conventional hard rock / blues song in search of a few lyrics and finding melancholy synth-generated effects and plaintive tunes, and a downbeat mood. The track does get quite Sabbathy in its last half and though it wanders about like the rest of the album, the repetition of the main riff motifs holds the song fairly tightly. “Eccentricity (e)” does not add much new to the album – it’s a straightforward melodic doom piece with some good driving riffs and strident sound – and chugs with lead guitar excursions into alternate psych-atmospheric universes all the way to the end.

After the first half of the album has passed, listeners will have figured out that the rest of the instrumental tracks will follow in a similar way as extended jams featuring perhaps some improvised music but generally following a few rules like keeping songs self-contained through the repetition of distinct riffs throughout. As a result, the album loses the element of surprise and the songs in the later half of the album seem not nearly as adventurous as the earlier music and sometimes give the impression of treading water. “Argument (w)” and “Ascension …” stand out as energetic and musically varied tracks with plenty of dark ambience and meaty riff motifs. As the album continues, listeners might find themselves wishing for the occasional sung or spoken lyric at particular points in most songs to give them a clearer identity and distinguish them from one another.

The album is a sturdy effort technically but I feel Monobrow have reached a crossroads in their career where they’ll need to change their formula quite drastically to keep their music fresh and their audiences keen and expecting the unexpected.