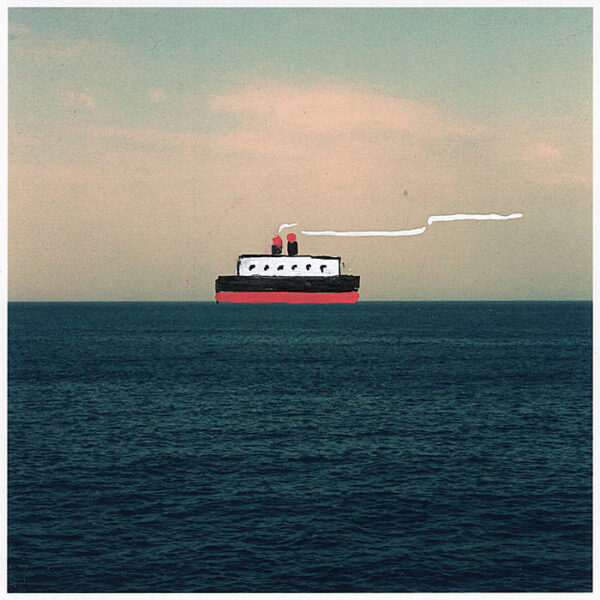 An ensemble of various musicians working in contemporary experimental Middle Eastern, free jazz and improv music scenes, all (except one from Chicago) hailing from Beirut, Cairo and Istanbul and boasting impressive musical pedigrees, Karkhana has already built up a sturdy discography that includes a collaboration with Richard Bishop. “Al Azraqayn” is Karkhana’s first album for Karlrecords and is a live recording made at Bimhuis, a concert venue famous for jazz performances in Amsterdam. I’m not familiar with the work of all the Karkhana musicians who appear on this double LP set though I’ve come across Sam Shalabi a few times in the past, having reviewed albums by his groups Shalabi Effect and Land of Kush. While I don’t hunt down everything he’s done, it’s always a pleasure for me to hear something new from Shalabi, just to see how far he’s come as a musician since I first heard “Shalabi Effect” way, way back in 2000. Turkish free jazz ensemble Konstrukt has also picked up frequent flyer points here at TSP and here the band is represented by Umut Caglar who features on bamboo flutes and double reed instruments.

Sure enough, Shalabi leads off on the first track here which is a solo oud instrumental introduction to “Nafas” (the second track) and “Al Azraqayn” generally: it’s just the kind of beautifully liquid and technically adept improv piece that lulls us listeners into a mindset open to anything and everything the Karkhana collective decides to pitch to us. Background ambient and percussive effects allow the introduction to segue gracefully into “Nafas” which becomes a full-on jazz / Middle Eastern contemporary folk work-out in lurching rhythmic repetition. Sliding drone effects and shrill reeds played by Caglar bring a heady discombobulating influence into the music. After “Nafas”, we’re ready for something harder, harsher and more sonically dense in the “Sidi Mansour” suite of four tracks: electric guitar, synth, electronics and woodwinds trade lead solo positions over rollicking drums and squiggly bass lines across some 20 minutes of music.

The “Huli” pair of tracks (Parts 1 and 2) sees Michael Zerang (Peter Brötzmann Chicago Tenet) getting plenty of exercise on drums and percussion before he and the rest of the band settle into laidback melodic Middle Eastern contemporary improv where Umut Caglar dominates in parts with his whining reed woodwinds, and electric guitars go for broke in much of the rest of Part 2. After all this frenetic activity, it’s time for more oud melodies backed by ambient electronic effects on “Al Sal3awa”. A lengthy psychedelic Middle Eastern free jazz journey follows in “Containment” (in two parts) before Karkhana finally live up to their name (modern Turkish for “wild party”; the word used to refer to a brothel) in “Rock Farock”, an exuberant blow-out of improv electronic and rock psychedelia.

It’s a wild and dazzling ride through a very heady fusion of Middle Eastern contemporary and avantgarde music genres, free jazz and improv: yes, some of it can be self-indulgent and a bit overblown but in these pandemic times when everyone has been sombre and told to tighten belts or “take one for the team”, the Karkhana guys can be forgiven for extending themselves and getting carried away on long musical excursions taking them (and us – go on, admit it, you enjoyed the ride!) far into another universe. Filled with passion and energy, not caring where it goes or how far, the music here defies all categorisation – it simply exists in, of and for itself.