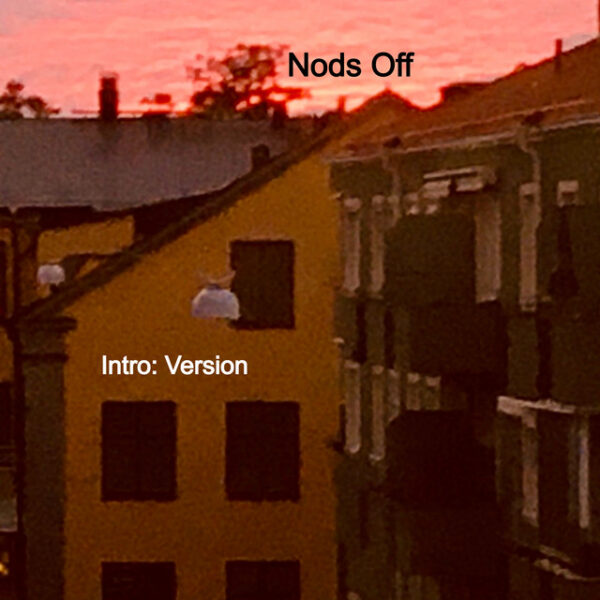 An interesting example of tape digging has come to light recently involving the Swedish avant jazz unit Nods Off, who have had three distinct incarnations since forming in the early nineties. Summer ’98 saw the original band imploding and, to fulfil a number of forthcoming gigs, bandleader/saxist Stefan Wistrand enlisted Tommy Skotte (ex Brötzmann sideman) on acoustic bass and Drummer Erik Dahlback (ex Red Mitchell/Per Henrik Wallin Trio) for Nods Off, Mark Two. A couple of years later, that line-up too, went ka-boom, when gigs in their homeland became too thin on the ground to contemplate further band activity. After that, Wistrand successfully helmed another set-up, but… sandwiched between all of this action and inaction, one can find Intro : Version, a live disc from 1999.

Aside from the Coxhill v Bennink thrust of “The Get Out” and “Dedication” (nearly ruined by audience natter), which are re-worked on further recordings, the remaining tracks are solely exclusive to this release. We start with the title track, its urgent squawk/clattering comes topped with a monstrous double bass salvo, sounding for all the world as if Skotte’s technique also includes deft mastery of “The Pliers”, liberated from the roadie’s toolbox when he wasn’t looking. After those still glowing remnants were cordoned off, the oddly named “Frebo-Di-Hali” makes its entrance. This finds Wistrand firmly in the driving seat with his full-bodied tenor sax embracing the twin worlds of the semi-lyrical and the frenetic. During which, an arco bass menacingly stalks the surrounding band perimeters, successfully deterring any further audience chit chat. “Combination #2” and “Jazzin’ Chair” are more marginally buttoned-down compositions, and at times, swing purposefully, perhaps referencing sixties ESP choreography.

…”Recorded at ‘Memento’, Eskilstuna and produced by M. Mori…” it says here. Now that jokey slice of Latin gallows punning is a curious thing, as there’s not one jot of miserabilism here, just a top-notch display of high octane, skronked-out jazz.