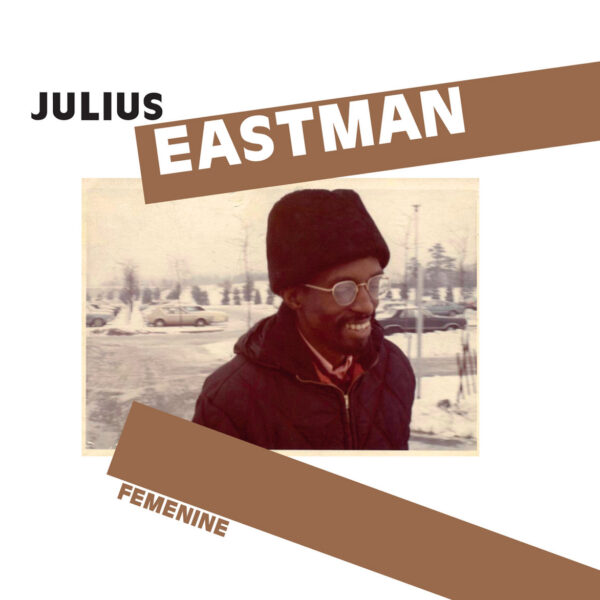 Here’s a new recording of Femenine (SUB ROSA SR501) by Julius Eastman, the Afro-American composer who for a brief time gained some recognition within the so-called New York school in the 1970s and 1980s.

Composed in 1974, Femenine was performed in November that year at the Composers Forum in Albany by an ensemble featuring Eastman himself on piano, as well as his home-made mechanical device for providing sleighbell percussion; that recording is one of the few surviving documents made while he was alive, and was noted by Jennifer Hor when it was issued by Frozen Reeds in 2020. She praised the “airily graceful, light-filled and complex work” and also noted the form and pattern of the composition – “there is a lot of repetition of melody and rhythm pieces on particular instruments”, elements which we find on today’s record too which could easily lead to superficial comparisons with the music of those more successful high-profile New Yorker minimalists, i.e. Glass and Reich.

However I am interested to read in the notes (by Stéphane Garin?) an interpretation of the music that proposes it’s in fact rather more informal; there are patterns, there are grids of notes, and there is a precise timing underpinning it all, but most of this is delivered by the percussion section. As Garin points out, “the rest is only skeletons of melodic and rhythmic figures that can vary freely”. I like the idea that there are parts of the music that are somewhat sketched-in, relying on the ability of the musicians to keep it afloat; and indeed the ability of the listener to hear things, deriving more information than there might appear on the surface. This tallies with what little we know about Eastman and his open-ended approach to his music: he didn’t like to impose rules on the players. His method seems to have been more of advancing suggestions and proposals, in the name of experimentation perhaps, and also perhaps gradually advancing the players along towards a realisation of the music, a realisation that could be shared. If any of this is true, it’s different to the more through-composed grand-scale works of Glass and Reich; at any rate, my limited understanding of their grids and arpeggios, which (for all their newness and minimalism) left little to chance, not a single minim left unaccounted for.

For this particular performance, Ensemble 0 have done a tremendous job in their interpretation; this is a relatively new French group founded in 2004 and directed by Stéphane Garin and Sylvain Chauveau. One of their hallmarks is that the lineup of the Ensemble is exceptionally fluid, and there is evidently a vast pool of talent which can be drawn on to realise each project. Perhaps this fluidity is what they mean by the term “variable geometry group”. I see their highly eclectic repertoire also includes works by Moondog and Arthur Russell. As to the tragic circumstances of the life and death of Julius Eastman, this story has already been outlined by Jennifer, and although it’s a sad tale of loss, alienation and rejection, it might contain a lesson about the power structure and elitism, implied or real, that obtains in musical circles. Ironically, it’s this very “outsider” status of Eastman which might be making his life and music so compelling to today’s audience. From March 2020.