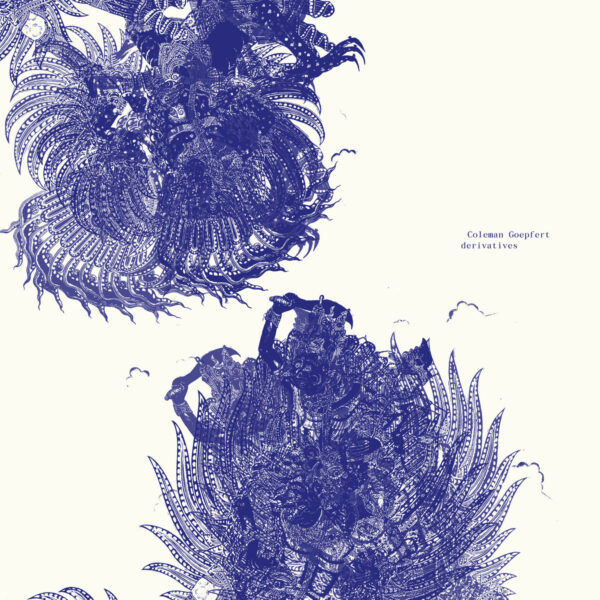 Coleman Goepfert has made Derivatives (WIDE EAR RECORDS WER053) using an electric guitar and an array of effects pedals…in fact there’s a photo of his set up on the press card I’ve been sent and besides a table with about 10 or 12 pedals, there’s also a laptop computer and various foot pedals, plus a large plastic box with his multi-coloured guitar picks. At first glance it’s not far apart from the sort of setup favoured by old-school table-top noise types for the last 30 years or so, but Goepfert is a composer; he doesn’t simply wallow in echo and delay effects, nor wildly press any button within reach. In the same photo we can see two pages from his notebook covered with notes and diagrams in many colours of felt-tip pen, looking more like the flipchart from a corporate seminar on team-building than a musical score.

The notes allude to his process, which seems quite elaborate and considered. The starting point is “a vast library of electronic and experimental musics”, which might simply be his own record collection, which he draws on for ideas and inspiration – and this includes a number of creators name-checked here, such as Merzbow, Nate Wooley, Stefan Prins, and other names unfamiliar to me. I don’t think he directly samples recordings anything as such; instead, he makes sketches and plans based his memory of hearing this music, or (even better) a memory transformed by his imagination. From this boiling stage, presumably jotted down at white-hot speed with those felt-tip marker pens, the makings of a score emerge; the work then undergoes further change when he sits down to perform it and record it, as his native guitar sound is fed through the pedals until it ends up completely transformed. He relishes this “alienation of traditional guitar technique” and the “entangled electronic manipulations”, as he slashes his way through the thickets of sound with machete and scythe.

Based on evidence of your ears, this “alienation” has been a 100% success; nothing on Derivatives sounds remotely like a guitar, and even those of you familiar with harsh noise, computer music, and the extremes of digital glitch, might not be fully prepared for the wild and seething textures that come your way. Besides being unnatural, you see, it’s also very complex and very fast – Goepfert doesn’t stint when it comes to ladling extra helpings of raw lava and sulphuric acid into your bowl. Not a guitar-player’s record; the point is the integration of the setup, over which our man has total command. These intense episodes are helpfully divided into manageable proportions if you buy the double ten-inch version, and you get one composition per side lasting around 6-7 minutes apiece. Although the opening cut ‘Boa’ is especially repellent, I found that by the time of side C and ‘Disco’, the relentless mode was easing off a little, and I was able to pick up a smattering of this very dense and complicated musical language. In short, though hot and exciting, Goepfert’s music is still structured and controlled, and comparisons with other efforts in untamed free computer noise will not stand. There’s still a hint of violence though, reflected to some extent in the cover collage depicting Asian deities and monsters running amok with scimitars, bared teeth, and wild eyes; these artworks, created by Coleman Goepfert himself, use duplication and overlays in much the same way as his music. From 30th April 2021.