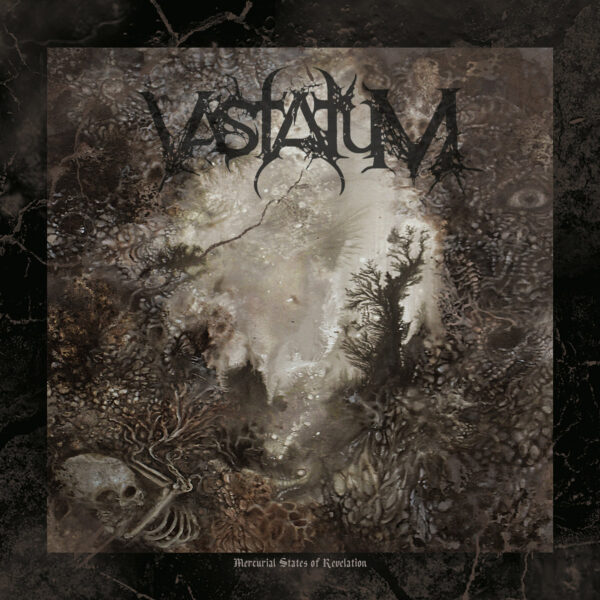 Based in Vancouver, Vastatum was formed in 2020 by Luzifaust and Wraith who at the time were (and still are) playing drums and bass guitar respectively in another Vancouver BM band Omnipotence. Drawing on classic early-1990s Norwegian BM and the later Cascadian BM scene (exemplified by bands like Wolves In The Throne Room, Ash Borer, Falls of Rauros, Fauna and Skagos) a bit farther south in the US Pacific Northwest region, Vastatum’s purpose is to reflect on and explore the view that the universe and the Earth are in a constant state of change and flux, that evolution and transformation represent the normal state of existence, and that by implication humans are part of this never-ending evolution and are compelled to adapt (even if through brutal strife and violence) by acknowledging this worldview and the reality it reveals. The duo’s philosophical position is revealed clearly in the title of their debut album “Mercurial States of Revelation”.

Opening track “Nascent Mother of Night” establishes Vastatum’s modus operandi of fast-flowing and furious BM prevailing throughout: a steaming acid noise barrage of tremolo guitars, flippy no-nonsense percussion (it’s actually quite hard but the guitar storm drowns it out) and harsh ranting vocals coming out of the blizzard storm. In this never-ending whirlwind, the musicians carve out a path of melodic surging riffs and a surprising emotional range that includes sorrow and longing as much as it does aggression. In “Fall With Seclusion”, a strong folk flavour in a mix of harsh and slightly cleaner guitar riffs and melodic soloing helps distinguish a song of many moods as ghost voices from another spirit dimension rage and shout a message necessary for us on this material plane to heed. The atmosphere on this song is mixed, at once urgent and commanding yet tinged at times with something approaching sorrow and empathy. “Mortal Abrogation” goes into darker, more dissonant sonic territory and the mood is more sinister, even malevolent.

“Upon the Dawn of Gilded Fire” closes the album in epic triumphal manner with the musicians adding in surprises – do I hear a bit of throat singing in there? – to enliven the core Vastatum style of maelstrom music. A doomy choir, a near-orchestral presentation with droning guitars and a dark brooding passage of classical acoustic guitars led by a solo dark blues lead guitar elegy round out the album and complete a cycle of life and death.

Admittedly Vastatum don’t bring anything radically new to the atmospheric BM genre and the duo have yet to establish a more distinctive sound all their own – individual songs, especially “Mortal Abrogation” with its dissonant and slightly jangle-guitar tones, sound like other BM bands’ songs – but already their ability to create and maintain states of deep complex and often contradictory emotion and majestic drama in a harsh and bleak whirlwind universe with just two sets of harsh distorted and cleaner, blues guitars plus drums and little else besides should be noted. Vastatum’s song-writing capabilities and technical playing skills are already very good but the musicians need to get out further from under their influences and inspirations and stake out their own position.