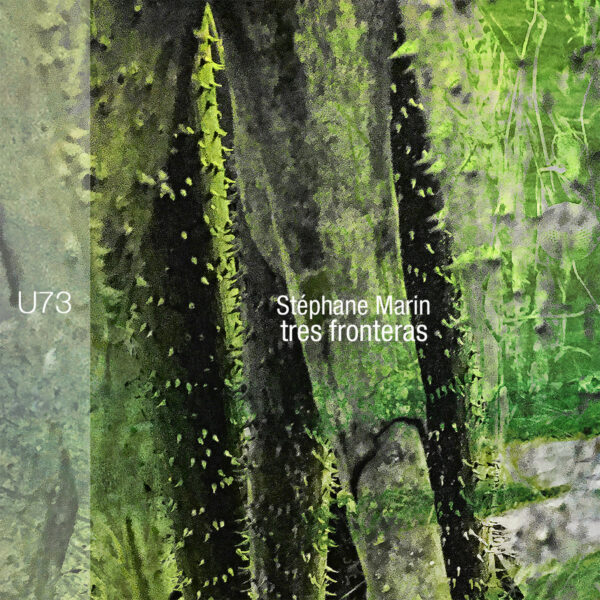 Active since 2003 as a soundscape artist seeking atypical sonic spaces to hear and document, French musician Stéphane Marin landed in that part of the Amazon rainforest region where the borders of Brazil, Colombia and Peru meet in July 2019. The album “tres fronteras” (“three frontiers” in Spanish) is Marin’s account in sonic form, based on field recordings in the main, of his trip to Colombia that not only took in the Tres Fronteras region – including the towns Leticia (Colombia), Tabatinga (Brazil) and Santa Rosa de Yavarí which sits on an island in the Amazon River in Peruvian territory, as well as the nearby forest surrounds which among others feature the worryingly titled Piranha Lake – but also the city of Medellín and nearby town Santa Elena in Antioquia department in northwest Colombia and Tairona National Park near the Caribbean coast. During his trip Marin was encouraged by Colombian sonician / philosopher Miguel Isaza, at the time curating a sound art festival in Medellín, to think about doing a project on liminality, that state of ambiguity (psychological, emotional, physical) arising from being between one stage or process and another; this definition was originally limited to the field of anthropology in the context of describing an individual going through a rite of passage but can now also refer to political or cultural change or evolution.

Given its theme, we shouldn’t be surprised that the album is one long track in which all the recordings of forest, flora and fauna sounds and background ambience, and of human activity whether in cities, towns, villages, homesteads or the Amazon rainforest itself, follow one after the other with no clear link between or among them, in a continuous, ever-changing tapestry where each and every recording becomes a transition in itself as well as a stage in Marin’s sound art journey. Some listeners may be surprised at how minimal and unassuming this album can appear with no apparent peaks or lows they can use to navigate the journey. There are long passages of quiet where it seems nothing much is happening. We probably should be aware of what expectations and stereotypes we bring to any mention, sonic or otherwise, of places like Brazil, Colombia and Peru or the Amazon rainforest region where these countries border one another, and the reality, as brought to us by Marin and others, that challenges whatever is in our heads. Yes, there are the usual background forest insect sounds, and the ambience of rushing water – but there are also juxtapositions of forest sounds and the backdrop of urban road traffic, or of booming electronic drone, bubbling water and chattering birds. (Was that a hippopotamus I heard in the far distance somewhere around the 32nd minute?)

It’s definitely not easy listening but then the whole point of the album is to challenge your perceptions and perhaps open up your mind and senses by immersing you in a world of constant change and flux, where barriers turn out to exist mainly in our heads and not on the ground.