Two items from the lovely Jacob Felix Heule sent to us from Oakland in CA.

Non-Dweller (HUMBLER-007) is a righteous blast of acoustic improv, just two very long tracks on this CD showing us that the players intend to strain and bend every muscle to produce the music, and all of that energy is impacted deep into the grooves here, with a residual half-life of about 200 kilojoules…Heule has only his bass drum to scrape and thump and grind, forsaking previous incarnations of his percussive self when he favoured metal apparatus and grindable objects. One bass drum producing all these groany lower tones, underpinning the churning mud and boilage, in the frantic scrabble for improvisatory supremacy. Second sprite active in the pink skies is Kanoko Nishi-Smith, who we heard on the excellent 2020 album Brittle Feebling. She plays the koto here. As you may recall from that earlier outing, the koto is just a sideline to her main work in classical piano and synth music, but she pulls life from that spiny stick-insect of an instrument as surely as any 8th-century sorcerer. Strange life, she creates, movements and actions so palpable they really do leap out of the record and land in your lap, ready for a wrassling bout with no holds barred.

Lastly there be Gabby Fluke-Mogul, adding further “scrape” to what is already a highly vibrant album of rubbage and non-musical grind, with the violin. This particular genius from New York has three solo records on her Bandcamp page that deserve your attention, and her photos ooze a certain rough-tough attitude exhibited in both dress and facial expressions. So far I might be making Non-Dweller appear to be a confrontational scrapple from the apple of untamed noise, but mostly what comes over is the deliberation, the sheer insistence of the music, as if by mining away at this very specific seam of sound the trio can bring down an entire edifice. I see the duo of Heule and Nish-Smith has a lineage that starts in 2007, but the New Yorker joined them in 2019, and this November session from that year makes one hope they will stay together and produce more of this cement-rich, lurching music with its steely bones and basilisk stare.

Cover drawings by Sara Partch Smith, the album endorsed verbally by writer Alex Tripp of Endaural; he it is who perceives the “sound grammar” underlying their moves. 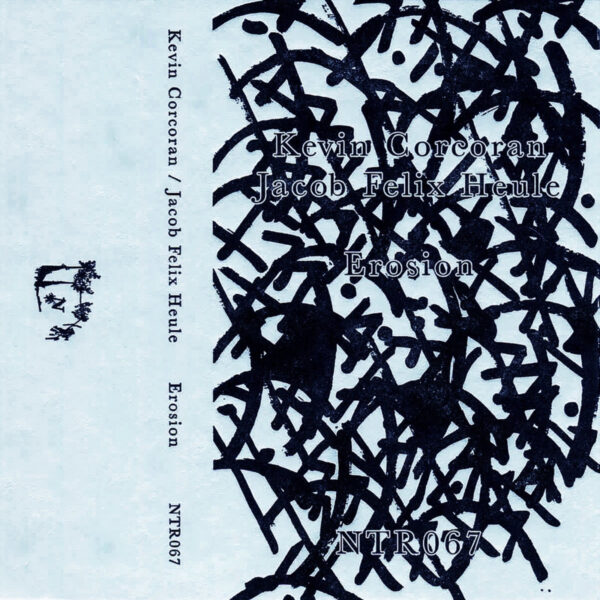 Second item is a cassette called Erosion (NOTICE RECORDINGS NTR067) and credited to Kevin Corcoran and Jacob Felix Heule. Recommended for yet more resonant scrapes and endless murmuring growlability factors, also for long duration – 40 mins a side of this ongoing, tumbly-rumbly half-noise in the acoustic sphere shall be yours upon purchase. If you thought Non-Dweller was pretty minimal, Erosion sets an even higher bar – just two bass drums. Actually reading between the lines it seems that cymbals and outside objects may also have been brought into a studio on the East Bay, but them bass drums still remain at the core of these remorseless groaners. Contrary to most expectations of what a human being would want to do with a drum, there is little or no “percussive” action on this record, and instead it’s all seemingly produced by rubbing skins and membranes, generating natural feedback, and some occasional metal scrape in the ether too.

Key words gleaned from press notes are to do with “gestures” and “sculpture”, likening the process to two old-school Rodin devotees wallowing in the bucket of wet plaster of Paris or squeezing eight pounds of clay remorselessly. Every action of hand, wrist, finger, thumb, palm, arm, and entire torso are magnified and transported by these fucking bass drums…and in case we didn’t mention it, the long-form duration is a big part of it too, so be prepared to check in for the long haul; bring gumboots and raincoat and settle in for these slow-motion aggravation grudge matches that will beat an entire 10 hours of WWE smack-down events.