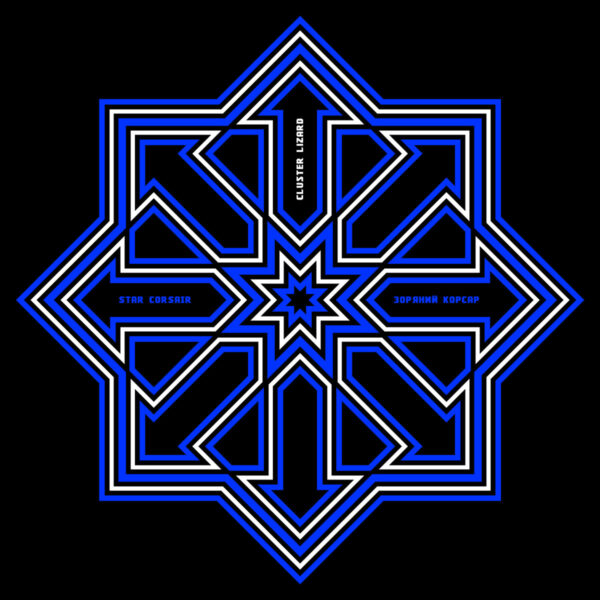 A very light and lively work of ambient / industrial / electronic music, “Star Corsair” is the third album from Cluster Lizard, the collaborative project of Berlin-based Ukrainian musicians Dmytro Fedorenko and Kateryna Zavoloka. The album is a tribute to Ukrainian science fiction writer / philosopher / futurist / dissident Oles Berdnyk (1927 – 2003), the album’s title deriving from a novel Berdnyk published in 1971. Later in 1976, Berdnyk would help found the Ukrainian Helsinki Group to monitor human rights in Ukraine and the Soviet government’s compliance with the Helsinki Declaration of 1975; the group lasted until 1981 when all its members were jailed, Berdnyk himself spending a total of nine years in prison and internal exile. Themes derived from the novel “Star Corsair” and Berdnyk’s own life – themes such as personal development and inner freedom leading to direct action – are threaded through this album which can be treated as a soundtrack to the novel.

“Star Corsair” is a recording of many moods, some of them dark, even a little gloomy, and others filled with the energy and light of revelation leading to personal transformation. For a soundtrack of ambient space music, the album is constant and busy; even its more contemplative moments of cosmic drone wash develop quickly. While the style of the music tends towards the minimal and the melodic, the duo pay equal attention to ambience and mood on the one hand, and creating melodies and rhythms with a strong electronic or industrial edge, with the result that this sonic universe is rich and layered. Listeners can’t help but become immersed in the music as active followers, concentrating on the repeating rhythms and melodies and where they flow, even though tracks are not long and none of them reach the six-minute mark.

The album is best heard in its entirety from the first track to the tenth for the full immersive effect which reveals the astonishing variety and depth of the music itself, and of the visions it may well unlock in your own mind as you follow it. I find that no one track dominates over the others and that is as it should be: all are portals individually and collectively to the universe and the freedom it offers in your own head.