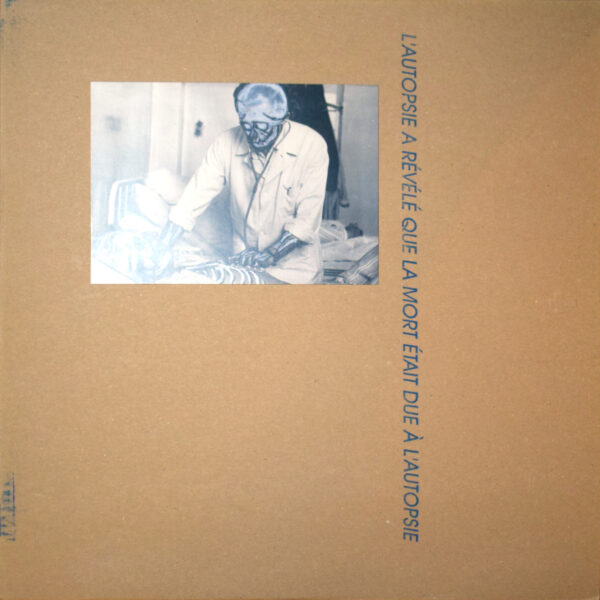 Herewith three vinyl items received from and related to Sébastien Borgo…very long overdue notice since they’ve been sitting here since 2009 or 2010.

Item with morbid skeletons on cover is credited to L’Autopsie A Révélé Que La Mort Était Due A L’Autopsie and it’s called Musica Acouscousmatica (KOMMA NULL 2010KNCS002). We’ve heard from this combo a few times before, most notoriously with their 2016 cassette set La Tétralogie de La Mortadelle. You recall that item had an image of a large Italian sausage on the cover; this album likewise evinces an underlying preoccupation with foodstuffs, what with the title’s inside-reference to couscous, the popular North African dish. There’s a full-colour poster insert picking up this theme, showing microphones pointing solemnly at a dish of unappetising food, as if hoping to extract some audible event from it. Credited on the insert are Borgo, Alan Courtis, Frank de Quengo, and Nicolas Marmin; the album contains 41 quite short tracks of electro-acoustic music and noise. My sense is that the plan with L’Autopsie is to make fun of “serious” music at some level, and the team are not above creating elaborate hoaxes about the origins and authorship of the work, along with bogus pseudo-academic analysis of it, to expose the pretensions of those who compose modern music, and also those who write about it. Even so, this Acouscousmatica is bold and striking, and though the sounds are extremely bizarre in places, they also carry a lot of conviction. The editing into short segments has resulted in very strong contrasts of timbre, one decaying sound juxtaposed with another, until your ears are thoroughly confused. It also results in a nice episodic set, a sense that’s bolstered by the elaborate track titles which are both absurdist and poetic at the same time. The inserts, printed on tracing paper, contain some commentary written in Spanish; I can’t translate it, but it’s probably full of satirical barbs. Very unsettling cover images revealing the skulls and skeletons that lie beneath both the doctor and the patient in hospital. No doubt these images reflect on the name of the band/project, which I’ve always taken to be a cautionary warning against the practice of too much analysis; if you overthink the music, you’ll simply end up killing it. 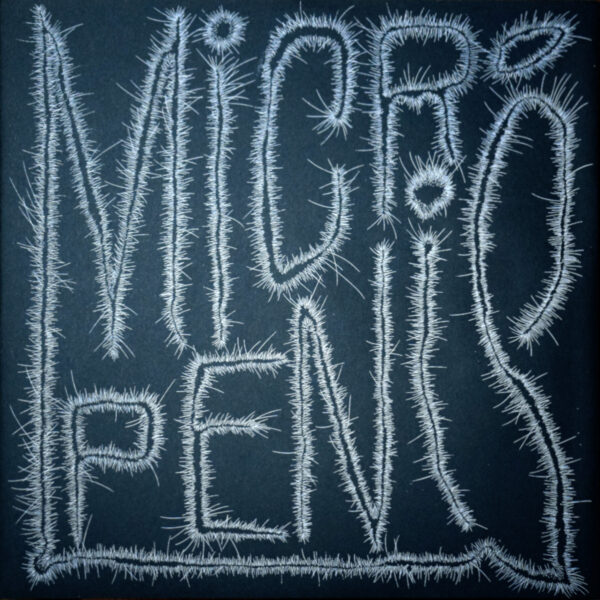 The self-titled Micro_Penis LP (DOUBTFUL SOUNDS doubt 03) from 2009 might be their debut; we’ve heard all their subsequent albums since then, including the nightmarish masterpiece Tolvek (never bettered, assuming you want to endure the audio equivalent of a bad acid trip). This one is packaged in a tasty fold out cover scrawled with spidery texts printed in silver on black, and a lurid Italian horror movie photo within; there are also postcard inserts which could be microscope photographs of horrible elongated microbes or a tapeworm. Micro_Penis is Borgo with Alexandre Kittel, Claude Spenlehauer, and François Heyer, and it’s pretty much their “performance” group, where all the energy and vitality comes from these like-minded lunatics bellowing and thrashing about bodily in the same room, though perhaps enhanced with effects to give it all extra juice. Percussion, electronics, and saxophone abound, all demented as a triple-layer sandwich from Hell. Voices are very much to the fore, as they are in later releases, not singing or reciting but simply barking out bizarre and nauseating sounds, like a zoo-load of utter insanity. By the time of 2014’s Der Trompeten Sauber the troupe would take this massed-voice work down some very insalubrious and offensive pathways, but here in 2009 the method is less formulaic, propelled by sheer absurdity and a certain amount of enthusiastic discovery on the part of those doing it. It might be their most “accessible” release. The results are still, however, nauseating and sick, wallowing in the grotesque and making a mockery of all that’s wholesome and common-sensical. Recent emails from Borgo indicate the band might be coming apart now; “Kittel [will] leave the band in June and Schleemm will move from Mulhouse to settle 300Km away in the countryside in 2 or 3 months,” he told me. “We tell ourselves that with Spenlehauer and Schleemm we’ll continue to work remotely but I don’t know if it will work, we will see.” 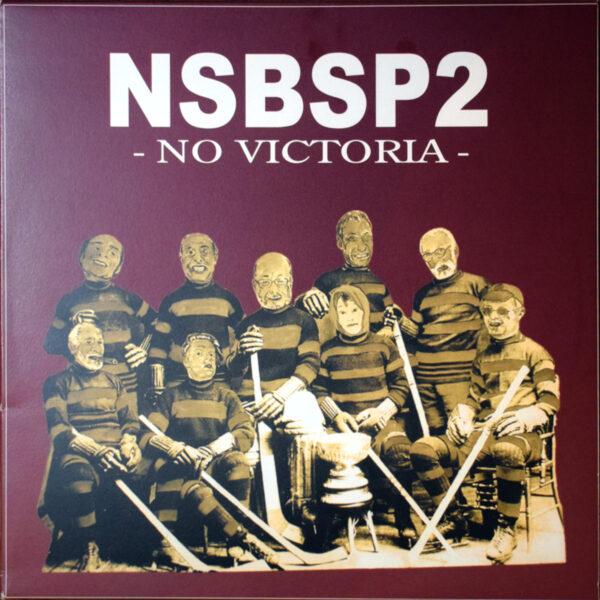 Lastly we have the ultra-odd No Victoria (BIMBO TOWER RECORDS BTR 09), a double LP credited to NSBSP2. This was produced by the unholy team-up of two bands – The Nihilist Spasm Band from Canada, and Sun Plexus 2 from France, the latter being what might be described as Borgo’s “rock” group. As regards snapshots of an embattled underground culture go, this one is especially poignant as it was released on Bimbo Tower, a Parisian agency (a shop, mail order service and a label) which was a magnet for all kinds of great alternative culture in the form of music, comics, and books, and might now be sadly defunct. I have never purchased a single LP by The Nihilist Spasm Band, and I’m not sure if I care to, mainly based on largely negative reports I’ve encountered from others. On the other hand, they have attained a certain status and aura, partly due perhaps to their longevity – they started in 1965 and their first album No Record from 1968 is not only very collectible, but probably regarded as a touchstone by American klunkers like Sunburned Hand of the Man and No-Beck Blues Band. Unlike other famed and very serious improvising combos AMM and MEV who formed roughly at the same time, The Nihilist Spasm Band are / were not apparently interested in music or improvisation, and just simply want to make a collective noise.

Sun Plexus have completely baffled me with past releases, but this may be because of the unorthodox approach to music production evinced by Borgo with Laurent Berger and Remy Bux – the liner notes aptly describe them as “raw post-punk mixed with concrete music”. This particular project may have been recorded around 2008, but the two teams met a few years before that and expressed a desire to play together. Four sides of incoherent, flailing nonsensical noise are the result; it certainly isn’t intended to be enjoyed as “great free improvisation”, but for some reason it is surprisingly accessible and fun, and even gels quite nicely in places. This is in spite of the fact that the two massed troupes just don’t know when to quit, and keep on flogging a dead horse well past the point when common sense should tell you to stop. In any case, it’s very clear from the liner notes (written by “Bruce Lee Galanter”) that there is a very strong anti-technique sentiment at play here, and they want to stress the delights of untutored and amateur noise-making, whose innocence is untainted by the curse of “proper” playing or correct musicianly skills. With this blend of weird rock and clumsy free playing, NSBSP2 make a persuasive case in support of this argument. Less keen me on the moments of “ranting poetry” bellowed by the Canadian team, the audio equivalent of an angry letter written in green ink, but these won’t ruin the overall listening experience.