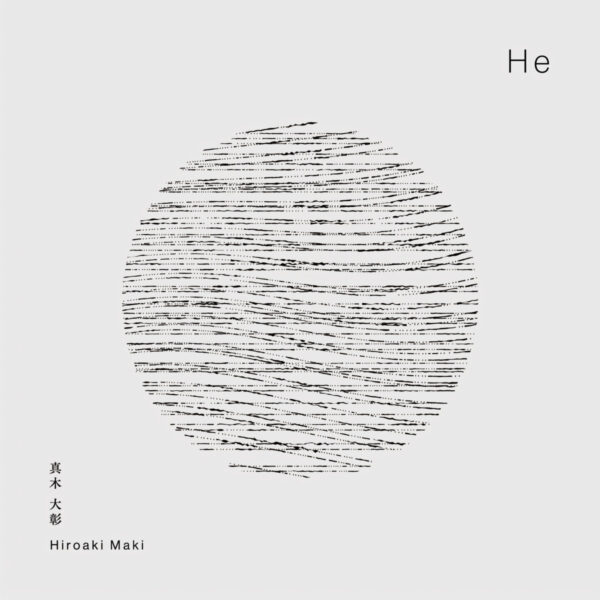 Here’s the third catalogue release from Zeroso, the Japanese label for marginal sound art founded in 2019 by Atsushi Reizen. We heard his Different Speeds album in 2019, a formal experiment in tape playback and varying speeds, which was a bit formal and boring. Today’s record He (EDITION ZEROSO ZRS-003) is is by Hiroaki Maki, co-founder of the label, and an avant-garde DJ artist in his own right.

From what I can gather so far, he’s not your conventional dancefloor DJ with his records of beat-driven techno, nor a maximal chaos-artist on the lines of Christian Marclay or fellow Japanese player Otomo Yoshihide. Maki instead has been driven by his interest in avant-garde music, found sounds, and continuous drones, and using turntables is just one part of his overall quest, which has evidently led him to occupy a very narrow strip of turf. What he’s arrived at on today’s offering is about as simple, minimal and materialist as this sort of art can be; it’s based on just two things, (a) the hum produced by a turntable when it’s turned on, and (b) the noises made by the cartridge when you rub it with bits of metal. To demonstrate the humming sound, we have 27:12 minutes of ‘Extrovert’, which is simply a passage of heavily-amplified white noise. Like the Reizen release, it’s very process-driven, and perhaps not very surprising or exciting, but I do kind of admire the purity of the idea, the sheer materiality of it. That said, you gotta wonder if it makes any difference whether this electrical hum was produced by a turntable or a fridge or a toaster or any other electrical machine. I suppose, having decided that the turntable shall be his chosen instrument, this is one way of truly investigating the inner core of the device you regard as your method of expression.

After all that blanked out ocean-roar drone, the second track ‘Introvert’ has more substance and grit. Hiroaki Maki rubbed nickel strings on the cartridge of his turntable, producing these obnoxious and absurd drawn-out noises, which sound like the world’s largest rubber band being stretched and stretched to breaking point, except that it never snaps. It might have the same effect on your nervous system. If you’re a hi-fi buff, you will wince at the thought of the damage this action must be doing to the most sensitive part of the turntable (let’s hope it wasn’t a Koetsu!). Hiroaki Maki calls this an “improvised performance”, I suppose in distinction to the white-noise track which is simply the document of a process, and in some ways we’re getting back to the rudiments of old-school table noise of the 1990s, where the gestural actions of the performer produce wild eruptions of insufferable noise at high volume. But Maki is doing it on a small and intimate scale, nothing like the guitar-hero antics of Otomo, and seems to want to remind us constantly that we’re not hearing anything other than the constituent parts of a turntable. Again, very materialist – and also somewhat claustrophobic. I mean that his gestures are extremely limited – after all, there’s a limit to how many ways you can keep rubbing a cartridge with metal strings – and rub as he may, he can’t transform his movements into those of a graceful abstract painter, let alone a musician. It’s doubtful whether he’ll ever succeed in making this basic action into something more transcendent.

Very extreme…I have a blank promotional CDR, but the finished product has a restrained circular motif design printed in grey and is packaged in an oversized card wallet with embossed printing. From 23rd July 2021.