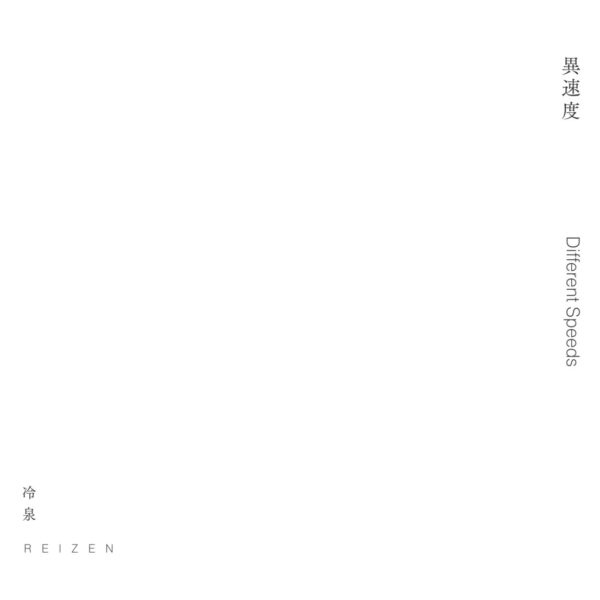 We’ve heard Atsushi Reizen, the Japanese composer and musician who usually appears as Reizen, on his 2014 LP which came out on Fylkingen. Its cover was all black and a steely piece of guitar minimalism it certainly did be. Even then he was presenting his ideas about differing “speeds” in his music, a theme which is emerging even more strongly on today’s release, Different Speeds (EDITION ZEROSO ZRS-001).

The sole track here is called ‘Different Speeds No 4’, and we’re told Reizen has created an entire series of these formal experiments over time, of which this is the latest installation. For one thing, I’m intrigued to learn about the long gap between these experiments – he did the last batch in 2011. Clearly not a fellow to be rushed into anything…I understand he ordered his breakfast at one hotel in Ontario and turned up to eat it seven months later. Have to say I’m not overwhelmed by the music on Different Speeds – already it seems to lack the gravity of that black-sleeved guitar album, but we have to appreciate that this is a statement of very delicate minimalism and is intended to illustrate, or demonstrate, a simple idea in a very precise manner. Plus it’s quite processed-based. The process in question appears to be sounds recorded onto cassette tapes, then played back at varying speeds in order to get them gradually moving out of synch. It’s done with just two sound sources – that’s part of the simplicity which I do admire.

There also seems to be an element of feedback delay, manually controlled by Atsushi Reizen, which is what causes the repetition of sounds that we hear. (If he didn’t control it, the experiment would build up changes in volume that could “overwhelm the sound” and ruin everything.) Well, his own annotations to this short (28:51) work indicate that we should be listening out for a “sense of instability” and a “constant variance of intervals”, causing odd effects in the “expansion and contraction … of time”. What starts out as single tones eventually turns into a simple tune of sorts, something almost quite elaborate and pretty in its elegant construction. And you can almost make out the hiss of the cassette players as they execute their programmed tasks. But it doesn’t do a whole lot to transcend this process, and the music remains just “interesting” without really saying or doing very much.

Perhaps I’m just a troublemaker, but I wish for a little more chaos in the situation, something where this out-of-synch feature is exploited to a higher degree. But one senses Atsushi Reizen is a shade too fastidious to allow this. The label is his own imprint, begun in June 2019 with his friends in Tokyo. From 22nd July 2019.