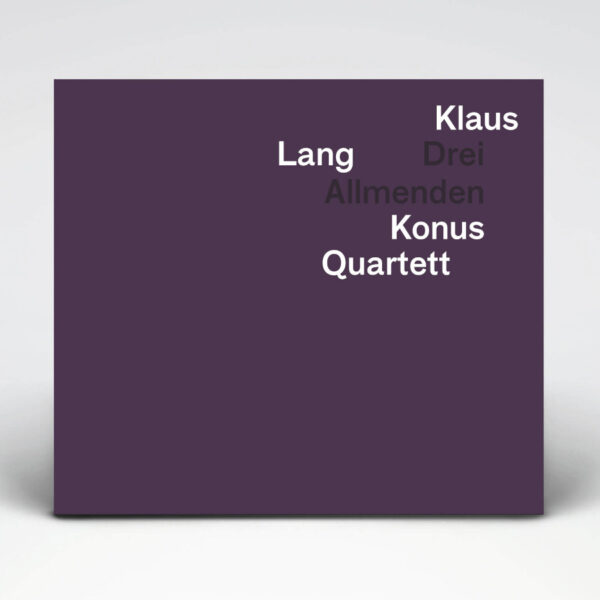 Klaus Lang is a distinguished Austrian composer active since the mid 1990s, with a string of impressive releases for Edition RZ, Col Legno, and Another Timbre. He also happens to be a trained organist, and it might be we first heard him when he joined Polwechsel for the superb 2020 record Unseen, showcasing his superb solo piece for the organ ‘Easter Wings’. Lang also showed up on Antiphon Stein, the astonishing Michael Moser work featuring sheets of metal and glass inside a church.

Lang also has very particular and quite strict ideas about his own music – according to his bio, his music is not a language, it isn’t used to communicate ideas or emotions or politics, and he won’t even admit to using sound (!). Duration and time are the only things that matter to him – he regards time as the “genuine material” of a composer and the “fundamental content of music”. Lang’s here today with Drei Allmenden (CUBUS RECORDS CR376), a piece in three parts which he realised with the Konus Quartett – four saxophone players, including our Swiss friends Christian Kobi and Fabio Oehrli who also happen to run this label. Lang himself plays the harmonium. Time is certainly a feature of this leisurely, drawn-out piece, where the musicians and the composer invite us to explore these interesting near-infinite imaginary spaces in some detail; I would note that while this is achieved with exceptional precision and careful placement of notes, resulting in shimmering harmonies and vibrations, this is very far from being “minimalism” or yet another piece of exploratory drone.

While not attuned to the nuances of Lang’s musical capabilities, even I can discern the very rigorous mind at work here. More than the duration, I think the thing to stress here is the collaborative nature of Drei Allmenden; Lang has carefully planned the composition to allow a certain amount of programmed freedom to the four saxophone players, and intends to achieve “an amalgam of the prefabricated and the spontaneous…it’s about creating a balance.” To endorse this colaboration, he provides a short tough-minded essay inside the CD where he attacks the old-fashioned idea of the “genius composer”, which has – according to Lang – led to a moribund state of art appreciation, where the music score itself has become a fossil, a dead thing. The problem has been compounded by ever-more egotistical composers who seek to inscribe their high-flown ideas in increasingly complex musical scores. Lang sees this aspect of music culture as something very unhealthy, and he pours scorn on the “quasi cult-like veneration” with which we treat dead composers and their works, as embodied in modern shrines like the concert hall and the institution of the conservatoire. These strong ideas do indeed echo those previously expressed by other modernists, Derek Bailey for one – he regarded modern composition as an enormous jigsaw in a box, which took days of effort to assemble and merely produced an image of stupefying banality. And Stockhausen, for another, who decried the design of concert halls based on the 19th-century model of orchestra and composer occupying this high priest-like elevated position as they handed down the culture from above to the lowly audience.

However, while this sort of polemic may lead you to expect a rather fiery and agitated kind of music, Drei Allmenden is serene, beautiful, and (as already noted) assembled, performed and recorded with an attention to detail that makes it seem almost perfectly-formed. Lang makes good on his promise of delivering a non-prescriptive musical score, a strategy that is as inclusive for us listeners as it has been for the players, From 19 July 2021.