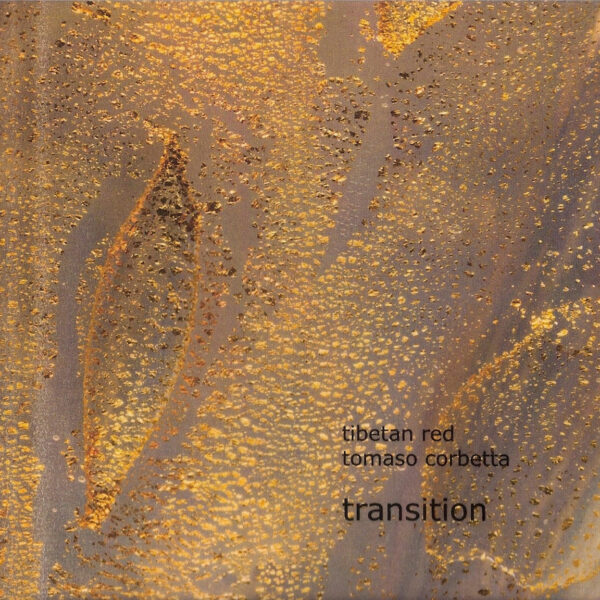 Latest release from Tibetan Red shows our man teaming up with Tomaso Corbetta to produce Transition (ANTAHKARANA RECORDS), a three-part work of gentle and mysterious sounds.

Tibetan Red (i.e. Salvador Francesch) has long dropped hints in his work about his associations with Tibet, and aspects of the Buddhist religion; on this occasion he now puts this spiritual aspect to the forefront, to address the death of a particular person who was very close to him. The record states that is dedicated to his wife Angels Tebé, who died in 2020. The notes, written by Salvador and Tomaso, describe how the music is an attempt to express “the unfoldment of the different bardo thodol states” that the beloved Angels would pass through. This is the renowned ancient Buddhist text more popularly known as “The Tibetan Book of the Dead”, and as such it made an appearance in rock music culture in the 1960s (e.g. through the witterings of Timothy Leary who claims he got it from Aldous Huxley, and thence to John Lennon for ‘Tomorrow Never Knows’). The bardo thodol attempts to describe the state of human consciousness after death, and also serves as a kind of “spirit guide” to help the soul find its way through the assumed stages of the afterlife.

Brave the man who attempts to translate this collection of nebulous and unknown matters into sound art, but this is precisely the task which Tibetan Red and Corbetta have set for themselves. For them, the time after death is “a set of adventures of unknown characteristics and unlimited situations,” which is putting it mildly. In these three suites, titled ‘Bardo’, ‘Crossing’, and ‘Vanishing’, they speak of visions, sound spectres, phantom profiles, and over the course of the record they hope to describe a very ceremonial journey towards “exalted states of clarity and golden perceptions”. At all times, they wish to stress that death is a “transition”, and that’s just one of the important messages they hope to convey. As to the music / sound itself, I sense that it represents a departure from the assemblage of field recordings that we have previously heard on Tibetan Red projects, although it’s possible field recordings were used; but what’s ended up on the disc is something so gently burnished, and carefully curated, that it feels almost like something perfectly formed, like a force of nature. Subtly and slowly, the music gathers pace until it does indeed suggest the passage of a soul floating along corridors of the unknown.

If we consider other musical versions of the afterlife, Keiji Haino’s would probably be dark and silver and filled with many chattering dead ancestors, while that of Pierre Henry would be very worthy and text-laden, full of sonorous verbalising. Transition is neither; a distinctly minimal, uncluttered, almost tentative sketch of things metaphysical, a zone where words have no place. At the same time, it’s beautiful to listen to. Also at the same time, there is no sense of threat or menace in this exploration of the unknown, and although there are many things we don’t understand, it’s clearly a very good place to be. I suggest that it’s the depth of feeling for a real person, and her death, that has successfully fuelled this long piece of music from its start to its finish; and this has also lent it an unbearable poignancy, yet without once descending into something sentimental or false. The ‘Crossing’ mid-section is especially moving. It may or may not be true to the structure and progress of the “spirit guide” proposed by the original ancient text (I am not an expert in this field), but I believe the creators are being very true to themselves, and they exhibit a tremendous restraint and sensitivity throughout this understated work. Even by the high standards Tibetan Red has set for himself, Transition is a unique and remarkable piece of work. From 12th August 2021.