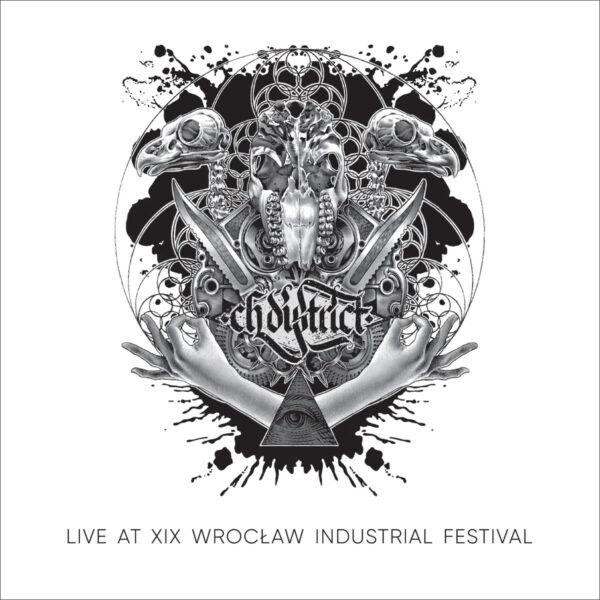 A one-man project founded by Miroslaw Matyasik in his native Poland back in the 1990s, C H District has a small discography for a band or project of its longevity and this recording is the first for C H District in about eleven years. The material for the album was recorded at the 19th Wroclaw Industrial Festival during the COVID-19 lockdown, and a video of it was broadcast online. Track 1 is the original live recording, lasting nearly 34 minutes, and begins as a heavy throbbing work with harsh whirling rhythms that progresses into strong electronic beats and spurts of synthesiser noise. Indeed the main instruments used here are modular synthesisers with Matyasik manipulating his sounds to build tension and atmosphere.

The live recording is a very insistent beast, full of jumpy energy and always demanding your attention as it progresses through a near-continuous storm of noisy, sometimes blaring sounds. The rhythms underlying those sounds themselves change even as they anchor the track. Mechanical techno-industrial beats dominate a good part of the track in its second half even as a near-shrill melody cuts through the space with all the grace of slashing knives. The recording concludes with a toybox tune that all but goes off-key and disintegrates.

A bonus track, almost as long, of an improvised recording based on the same structures as Track 1 but going in a different direction and broadcast from a home studio – hence its title “Home Studio Transmisttion” – and this is just as noisy and hard to ignore as the live track. It’s even more jittery and in sound and in its beats-driven structure it overlaps a lot with techno with quite a lot of noise and dark ambient influence mixed in. Over its length the track stays very consistent with just the slightest hints of a dark sinister presence in the background, with the searing tension in the background and the increasingly boisterous and fractured nature of the electronics holding your attention to the end.

You can’t help but think that the increasingly chaotic nature of both recordings, and the way in which they appear to collapse, might be Matyasik’s response to the pandemic lockdowns in Poland and how orderly (or not) they were in being carried out. A warning might be discerned here as well of how easily society can break down in spite of (or even because of) its laws and structures which are only as effective as the trust people have in politicians and government officials.