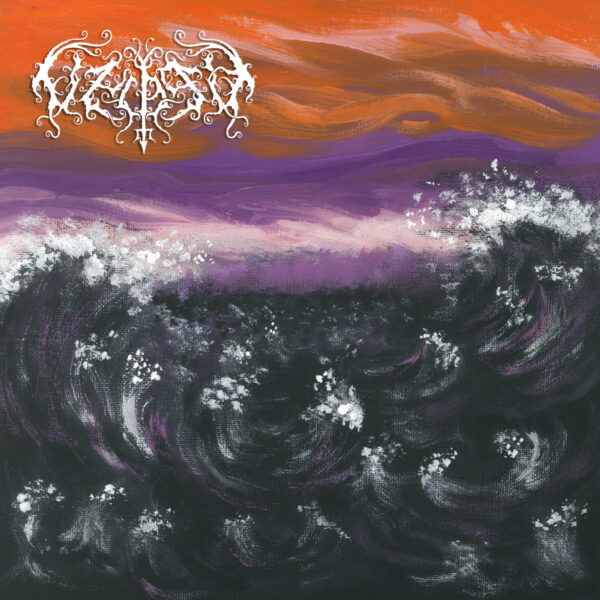 I’d been impressed enough by Uzlaga’s earlier EP “Submerge” with its theme of lost warships and their drowned crews, that almost as soon as the Bristol-based project put out its first album, there I was checking it out on Bandcamp. Uzlaga continues with its exploration of the sea, and wars and battles fought at sea with all their appalling consequences on “The Might of Waves”, though here there are no references to specific lost British naval ships as on “Submerge” and another EP “Longitude” which I haven’t yet heard.

For this recording, Uzlaga opts for a noisier raw black metal style which makes the music sharp and ferocious but which also buries the vocals so much, they really sound as though they’re fighting harder than hard just to be heard above the music. The noisy raw black metal template is established on the title track (after a short ambient instrumental that opens the album with a gloomy murky atmosphere): harsh ragged guitars roaring up a storm, punctuated in parts by short passages of dark sighing despair. As the album continues, Uzlaga reveals a more melodic rock’n’roll side, with a melancholic ambient edge, to its style. Anger, energy and harsh raw sounds mixed with atmospheric murk and the odd excursion into slower, even doom-influenced music (as on “Warhorns cry as the World waves Goodbye”) make for a very heady mix.

The last couple of proper BM tracks “Watery Graves” and “The Lighthouse” feature a good balance of raw energetic ferocity, snappy melodies and a distinct lead guitar sound that brings a bleak atmosphere to the music. The vocals do their damnedest but they’re just too thin and far back in the music for the anger and savagery to make much impact. Even so, the music is intense enough for these songs to be the album’s highlights.

Yes I confess to being disappointed by the change in style and sound – Uzlaga sounds thinner and trashier than on “Submerge” and the emphasis on raw and noisy detracts from the former heavy crushing aspect of the project’s style. The vocals really need to be more upfront in the music to increase its intensity and anger. Perhaps in the not-too distant future a bigger label than Uzlaga’s own Blackmetalgram label can pick up this album and reissue with a different production that still preserves the raw sound but brings the vocals and lyrics to the forefront where they belong.