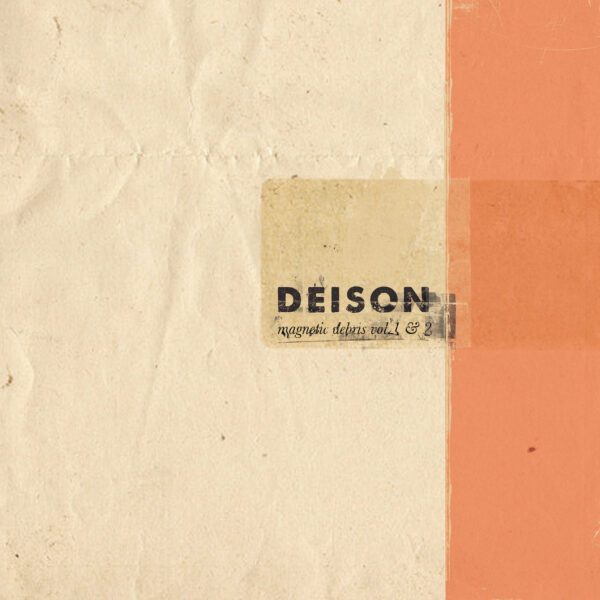 I must confess this double set is the first work I’ve heard from Italian sound artist Deison, even though he has been active as an experimental electronics / noise artist since the 1990s and has collaborated with the likes of Maurizio Bianchi, Lasse Marhaug and K K Null. He has quite a large discography as well both as a solo artist and in collaboration with others. You would think then that his most recent solo album “Magnetic Debris vol. 1 and 2” would deserve a much better front cover appearance than the bland, almost cheap and slapdash packaging it has, especially after you’ve heard the mysterious dronescapes on the discs hidden within. Recorded and put together in 2018, the album compiles works based on the editing of archived tape loops and “found” magnetic sounds subjected to multi-channel treatments, then re-assembled and mixed with audio generators and electronic instruments. The original archived tapes themselves often feature sounds played on found objects or musical instruments, and the age of the tapes may go as far back as the late 1990s.

Across the fourteen tracks, the drones unfurl slowly and gradually reveal their secrets in all their quiet and deep mystery, while in the background space hidden entities may pass by, their presence known only by the muffled sounds of their activities. Most tracks don’t spring major surprises on you and they can seem fairly static. On Disc 1, “Reverso”, coming in the middle, is a glacial shimmering presence that may reveal but a slight glimpse into the vast cosmos of contrasting light and darkness that the track acts as a portal to. It is a deeply affecting track with a growing tension, even a sense of terror as you realise that once you’re inside this alien universe, you are permanently shut in.

More mystery, perhaps in another universe that hives off the dimension in Disc 1, awaits on Disc 2 though a couple of early tracks may feature quite recognisable tones and noises. As on Disc 1, the grandest track here comes late: this is “Interior Wreckage”, initially a warmly radiant piece of quivery sound with a looming drone that becomes intense and ominous. Unlike the majority of tracks on the double set, this long piece does have moments of abrupt changes in activity to the extent that it is almost chaotic.

A very long work totalling 80+ minutes, this does demand careful listening but with its deep atmospheres inviting brooding immersion, “Magnetic Debris …” would be the perfect soundtrack for a lonely evening when all you want to do is escape your own negative thoughts and feelings and the dreary reality around you, and dive into another universe and dimension.