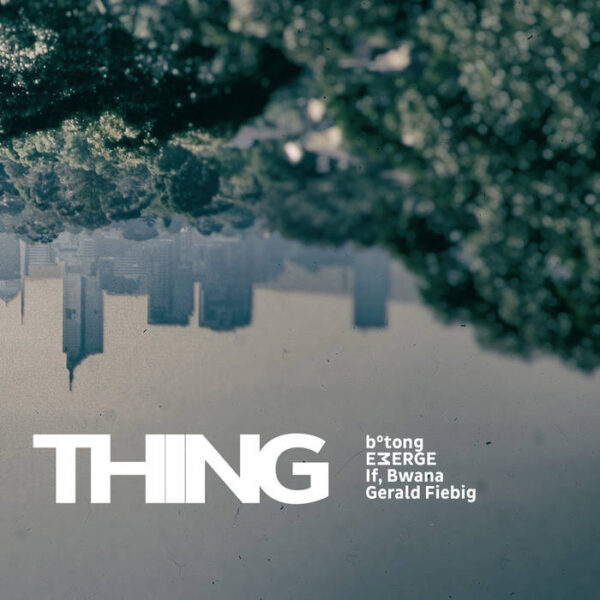 In 2021, German label Attenuation Circuit began a series of compilation releases in which each release will be a four-way split CD known only as “THING” with the four artists featured on the compilation each contributing one track lasting some 12 to 15 minutes. This first CD in the series features reissues of two albums that were the first vinyl releases for Attenuation Circuit: a self-titled split LP by b°tong and EMERGE, first released in 2012, and a split LP by If, Bwana and Gerald Fiebig that followed in 2013. On b°tong and EMERGE’s original split, both artists had access to the same sound materials to construct their works, and a similar approach was followed by If, Bwana and Gerald Fiebig. To comply with the rules, as it were, of the new series, the four tracks on this CD are exclusive to the label and the original LP releases are currently out of print.

Swiss artist b°tong leads the way with “First kiss of the lady of initiation”, a long and very spooky piece of darkly cavernous atmosphere in which sinister drones roam about the large space, shining their light onto something that may or may not be suspicious. While “First kiss …” can be quite loud, and the sound sources are obviously digital, the style of this track can be best described as dark ambient with touches of noise and industrial. The mood can be ominous but it is not menacing and the soundscapes are amazingly clear. Near its end, the track becomes quite playful, even cheery. Though EMERGE uses the same sound sources as b°tong does, his release “Expulsion” is a very different creature: a more sinuous droning work, it toys with your curiosity and sense of foreboding, alternately playing innocent and insouciant, then beguiling and mysterious. It leads you down a very particular labyrinth where industrial sounds are a constant part of the background.

The sound materials used by If, Bwana and Gerard Fiebig include recordings of organ made by Fiebig and of recorders (acoustic) by If, Bwana man Al Margolis but the results end up sounding very, very different from their sources under much processing and tweaking by both gentlemen. If, Bwana’s “Fie’s Big Organ / Recorders for Augsburg” presses the tones of the instruments to their utmost so that they bleed right through those tiny pink cells between your ears. The sound is very oppressive despite the initial bland quality. A sense of something horrible about to happen is ever present. Gerard Fiebig’s treatment of the same source material (with the addition of acoustic guitar, electric guitar and electric recorder sounds) in “Sustained Development” is gentler but with more sounds bordering on the inaudible moving through the space, it seems more complex and subtle. Occasionally snippets of the source materials will appear as they are in all their unadorned if brief glory.

I must admit being more impressed by b°tong and EMERGE’s side of the compilation with its deep sounds, huge spaces and range of volume within. This part is a truly immersive listening experience and I really could wander around here forever with denizens of those artists’ universe zipping around me and invading my head. If you can stand it, this part of the CD should be played as loudly as possible. Together with the contributions from If, Bwana and Fiebig, this four-way split CD opens the compilation series for Attenuation Circuit in a confident and emphatic way.