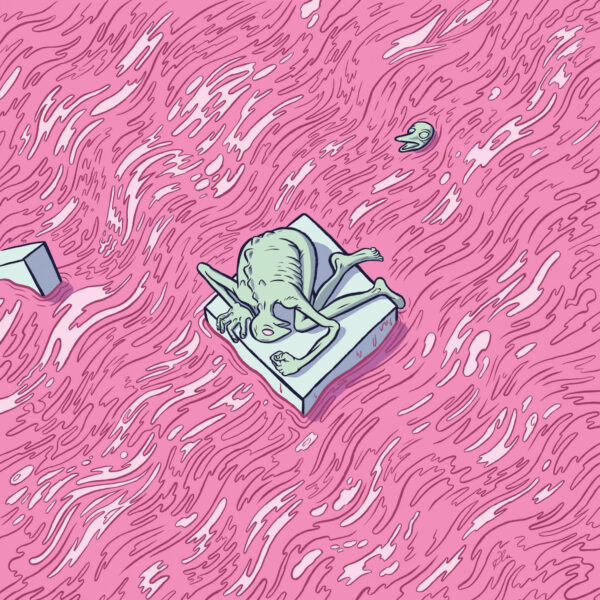 Not so much free jazz blowing here, rather a very composed and nicely-arranged set of long tunes paying close attention to dynamics and exciting shifts in register, making it all extremely accessible. I see Vågan often draws favourable comparison with the great Charles Mingus, who was not only a bass player and a maverick larger-than-life character, but also a superb arranger and bandleader. He in turn drew influence from Duke Ellington, and it’s traits of Mingus and Ellington that do indeed surface frequently on today’s set of taut tunes and demonstrations of instrumental prowess. I mean particularly in the execution of difficult time signatures, and switching between them midway; the bold intervallic leaps in certain tunes, such as ‘AfterMath Rock’; and also the way that the different voicings of the instruments are carefully showcased and combined to thrilling effect. Brass, strings, woodwinds by the score, plus piano, Hammond organ, synth, and two drummers.

Vågan also elects to tell a “story” in his music, or at any rate create musical impressions of an interesting scenario, one that’s a hot topic – he calls it an “end time scenario”, one where the characters are completely unaware of the “impending doom” that’s coming down the pipe. In fact, he’s tried something akin to this in 2018 on Happy Endlings, a piece to which Plastic Wave is reckoned as a sequel. But he refuses to be pessimistic, and finds a peculiar sort of black humour in the end of the world, which he describes as “apocalyptic slapstick”. This streak runs throughout much of the lively music on Plastic Wave, and we can’t help thinking of it as one jump away from circus music to accompany the entry of the clowns, except that the circus is a grim parade of decadence and the clowns are utterly grotesque as they cavort through this final act as the human race takes its final bow. One specific fate that awaits us, according to Vågan, is a dreadful meltdown that he likens to a volcanic conflagration, melting all the plastic and trash with which we’ve polluted the globe, and creating a new geological specimen thereby. This has been visualised by Flu Hartberg on the cover artworks, depicting semi-humanoid green blobs poised precariously on square slabs, all swept along in the vast plastic wave as it tips them over the edge like a waterfall.

The record thus contains a serious warning for the human race, for sure, but it’s not delivered in a gloomy or didactic manner, and the music is massively entertaining. From 6th September 2021.