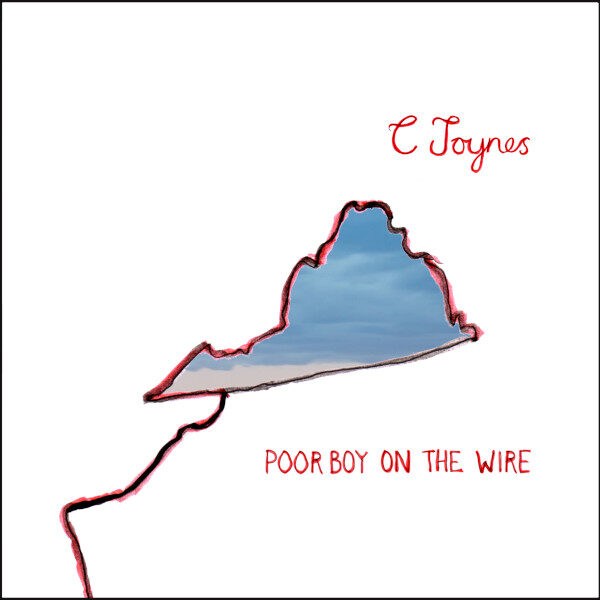 Latest record by C Joynes, the unique English guitarist, adventurer, and all-round good guy…Poor Boy on the Wire (CARDINAL FUZZ CFUL 0221 / SOPHOMORE LOUNGE SL 124) has been released in both LP and CD form, an enterprise which required the efforts of two separate record labels, and apparently it’s the first time he’s released an entire solo LP of all-electric guitar playing. This rings true come to think of it, as this player seems to cemented his reputation in the early days through his astounding work on the acoustic, impressing many with his precision and range, and through making plain his influences and debts, perhaps allowing himself to slot into some vague “folk music” pigeonhole with his deep knowledge of English and American folk forms and their history (and those of other countries too). It’s also his first proper “solo” release since the landmark Congo LP came out on Bo’Weavil Recordings some eleven years ago – though there have been a few splits, cassettes, and many other projects along the way. We could mention Split Electric from 2015 (with Nick Jonah Davis) which may be the first time we really savoured the delights of Joynes on the amplified fretboard.

12 instrumentals, all made with one electric guitar and an amplifier I have to assume, although such is the player’s skill that I dreamed I could hear a lo-fi electric organ backing in places, and a drum machine in other parts, and even an upright bass and claves on one track, but this can’t be right. Besides his obvious charm, his fluency, his gift for melody and rhythm, we could also point out the concision and compaction in these solos – he’s not a discursive player of the sort that requires 15 minutes to unwind and limn his imaginary portraits and landscapes, and when he embarks on one of these dense miniatures, there’s much ingenuity in the way he gets all the puzzle pieces to lock together into a satisfying whole. Does this make him a composer, or a player with an innate skill for honing tunes into the right shape? Then there’s the odd hocketing rhythms which may spice up an otherwise smooth ride over this terrain – a ride made by bicycle, I must say, picking up a clue from one of the titles – listen to ‘Night Over Djerba’ and prepare to be wrong-footed by its sparky syncopation. Or even ‘Goold’s Bicycle’ itself, a musical portrait of the strangest bone-shaker Penny-Farthing still in operation in the world, hopefully in the hands of some retired missionary in Africa.

I see I’m starting to allude to “world music” now, but I’m not musicologist enough to pick apart the many strains of music that have fed into the consciousness and deep musical appreciation of Joynes. Better not pick apart this magic carpet. I have to assume he’s heard more unusual and exciting records than I have, and more to the point this music has become part of the very fabric of his body and mind. He doesn’t tell you about the world through his music, he evokes it, allowing you to live experiences. If we had to choose up sides, I’d clutch for descriptions like “crazy international jazz and imaginary walking blues via Mali” and end up tying myself in a knot, or else waiting for delegates from the various Embassies to pay me a visit with their ropes so they could tie me up…and hopefully ship me away on a slow boat to the Far East, nailed inside a crate.

I also wanted to allude to the “darkening skies” I feel oozing off every pore of this record, in spite of the upbeat nature of many of these jauntsome cuts, and what I’m feeling on my skin is a heat haze, claustrophobic slow air hemming me in, and a fugue for impending disaster. Joynes is emphatic that Poor Boy on the Wire is “not a lockdown album”, no doubt surfeited with reading about other musicians trotting out their solo efforts from that bleak episode, and rightly so – I credit Joynes with being a visionary of world affairs, politics, geophysical scenarios and their outcomes, and if he is dropping hints about impending doomscapes, we’d be advised to bend an ear. Just listen to his rendition of ‘Someone to Watch Over me’, the penultimate cut here – yes, it’s the sentimental Tin Pan Alley classic by George and Ira Gershwin, delivered in spare and no-nonsense manner with a brisk pace by our man, reclaiming the song from the saccharine mouth of Ella Fitzgerald in the name of freedom and truth. We might say how his distorted tones cut through the treacle, but he’s also giving due attention and care to the sweet chord sequences and embellishing same with a compassionate flourish. Yet the takeaway is still slightly bittersweet – rather than the lament of an insecure lover seeking affirmation, it feels more like the prayer of a dispossessed refugee, or an orphaned war child, a lost soul hoping for a small ray of empathy in an uncaring world.

One last thing I am lacking in my digital press pack download is the contextual annotations – if indeed there are any. In former releases I would look to Joynes to drop hints and whispers about the meanings, histories, and astonishing imagery lurking behind certain tunes and songs, but not so much on today’s release. Maybe he’s just saying it all in the music (and titles) now, and the cryptic cover artworks. Through both channels, yet. Did I mention it’s available in both Mono and Stereo mixes? Aha. The mono mix is certainly the audio wallop that delivers the fodder to my coach and six, and through its plain unvarnished surface we are able to connect C Joynes to lots of historical git-music I love – session players in Sun studios, every raw rockabilly reverbed strummer from the Meteor label, nasty garage punk teens from the 1960s with their snarling Fenders, and even my beloved Roy Smeck, a pre-war genius who is little remembered these days…anyway, I trust the reader will forgive my customary lapses into surreal and acid-fried fantasy above, but be sure to hear and enjoy this amazing record. From 14th September 2021.