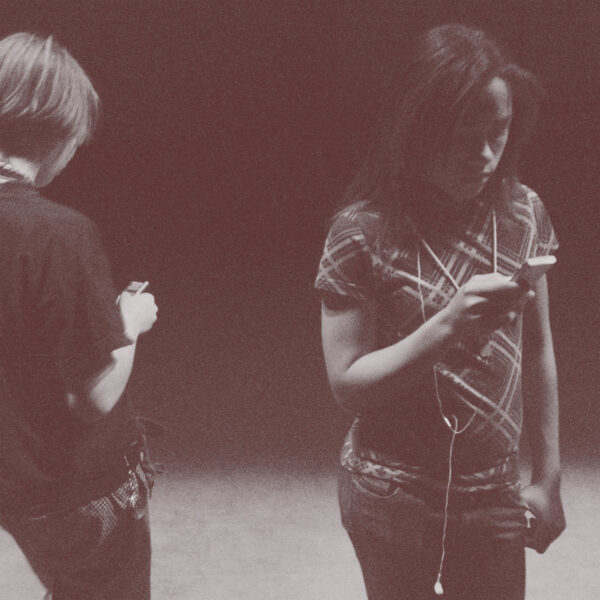 Teenage Lontano was composed in 2008, and on this record we have the premiere version performed at the Park Avenue Armory that same year. It’s intended as an updated “cover version” of Lontano, the 1967 orchestral composition by György Ligeti. Here though it’s performed as a vocal / choral work, entirely by non-professional musicians, who happen to be teenagers. They are singing in tune to what they hear through earbuds and mp3 players supplied to them by Rosenfeld, who carefully rescored the entire piece as separate vocal strains for this work. The youngsters were lined up in a very precise column (as if they were on parade), hooked together by the common practice of shared earbuds, and subsequently they could also hear their fellow teens singing their parts, to the extent that the real voices almost drowned out the sound in their buds. In her digital vocal score recreation, Rosenfeld ended up with a piece almost twice as long as the Ligeti original, and the overall sound is much more diffuse than the master managed with his brilliant micro-chords and clusters.

While I was all prepared to slam down any upstart who dares tinker with my beloved Ligeti, Teenage Lontano has totally won me over with its respectful air, and one can’t help but applaud the method which clearly enables non-musicians (I assume – please do correct me if not) to achieve such fine results. I agree with the assessment that it’s a very “contemporary” update on 20th century classical composition. Did I mention there are also added “floating” electronic music interjections, and a rotating horn suspended over the performance space, which for some reason spins at the same speed as an LP record. The work has been performed internationally many times since 2008.

Second piece roygbiv&b is perhaps cut from a similar slab of aural cloth – at any rate, it could be described as another “choral” piece. A number of elements in the process here – the content was originally provided by a Brooklyn youth choir, given Fluxus-like instructions for an improvised word-based score, freely riffing on the letters in the title and half-remembering snatches from contemporary pop and R&B records. This is then played back in a suitably reverberant space – it worked well in the atrium space of the Museum of Modern Art in New York, although the one we hear on this record took place in the South London Gallery in 2014. It’s worth checking out Marina’s website so you can see the pictures of the large horn-like loudspeakers that were used to create this very “spatially dispersed soundfield”, to use her own expression; I think it was possible to point the speakers in very specific directions to maximise the diffusing effect. The last element is to do with clever punning; the composer makes a comparison between “spectral music” and rainbows in the sky, and likewise the title (an acronym for the colours in the rainbow) was used by the singers to prompt their lyrical interjections. Marina Rosenfeld likes the idea of composing a rainbow indoors; she’s done it. (30/09/2021)