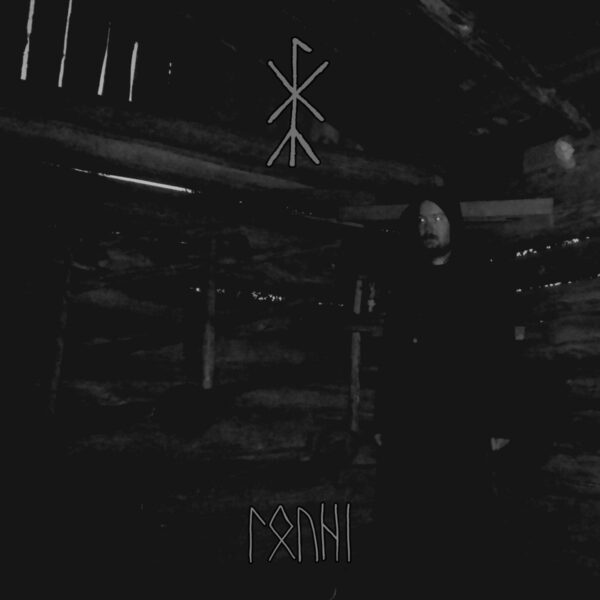 Inspired by the evil witch character Louhi of the Kalevala is this album of the same name by solo atmospheric BM / dark folk act Käärmekristus (“Serpent Christ” in English), helmed by musician / vocalist Ophiuchus Caedo. The first thing I notice about this album is its unusually twangy and ringing sound, as though our man OC had in his possession a magic metallic kantele (Finnish zither) and moreover had the technique or knew the occult spells needed to play the instrument such that every plucked string had the power to hold you in thrall forever to its dark jewelled tone. Combined with the raw steaming sound of the guitars, like a huge grinding machine, the basic production and OC’s strange chanting vocal, as if the man were in the grip of alien forces, the recording has a decadent quality: mouldering and giving off more than a whiff of evil decay.

Early songs like “Saatanan Sammas” follow a distinct pattern: the kantele-like sounds pound out the melodies while the guitars follow closely behind and OC’s gravelly voice, even in tone, chants the lyrics – not always in time with the music but occasionally deviating onto a separate path and then falling back in with the music’s beat and rhythm. The ambience is dark and reeks of decay and corruption. Most songs tend to repeat over and over with looping riffs and melodies, and there is not much development throughout them but with such rich sonic textures from the two sets of strings, the music is best kept structurally simple.

The album’s highlights are the “Pahojen synty” tracks I and II, coming third and fifth respectively in the song listing for their weird dark folk music passages, the lush, humid forest ambience, the mechanical wooden beats, and the gabbling vocals. These tracks really push the album into another world of strange and sinister occult magic, mystery and deranged ritual. The two long tracks coming at the end are more developed in structure and lyrics than the rest of the album, and feature alternating passages of instrumental kantele and burning drone guitar riffs. “Tuonelan matkoista” has a sinister feel with the wooden thumping that passes for time-keeping and the robotic nature of the vocals. “Ylistys kuomalle” has the air of a dirge with the addition of a sighing angelic choir to the mix of marching beats, the guitars and kantele intertwined and pounding out notes, and the groaning monotonous chanting.

The repetitive nature of the songs may not endear this album to people expecting something a bit more flowing and perhaps less obsessed with ritual. The voices especially are monotonous but that very quality along with the robotic style of chanting renders them maniacal and demented in nature. The guitars in their never-ending burning corrosion and the bewitching kantele tones – at once beautiful and beguiling, and growing increasingly demented – dominate the music to the extent that you could, if you wanted, forget about the singing and the thumping beats and just surrender yourself to the strings.

What’s most impressive about “Louhi” is the sense of an entire alien universe conjured entirely by one musician using a small set of instruments and basic song structures and elements: a universe initially gorgeous in appearance but turning out to be evil, corrupt, decaying, demented and obsessed with compulsive repetitive ritual.