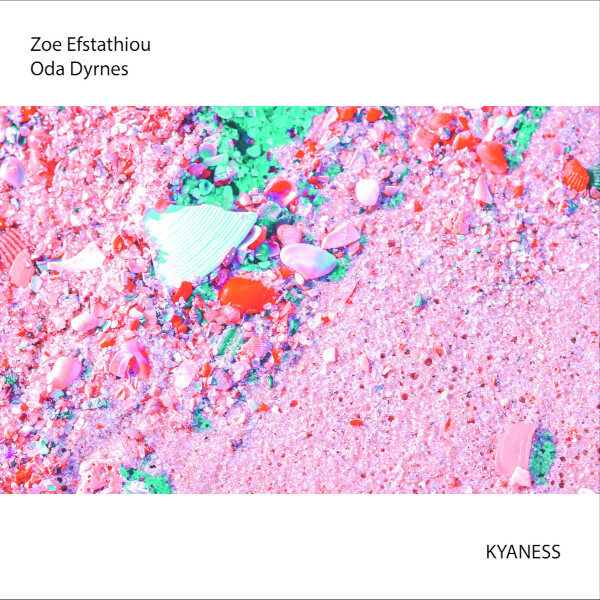 It’s pretty free-form to the extent that the music is largely tuneless, and mainly about the sound they make – and the sounds are brittle, dusty, and rather cold. They’re trying their best to interact, in a series of actions which the press note calls “intertwining”, as they generate these scraping and percussive sounds, yet the pair still seem hesitant and uncertain of each other to my ears, as though they were total strangers asking generic and superficial questions to get the conversation started. However, microphones are a big part of the recording approach; they wouldn’t be the first modern improvising musicians to close-mike their instruments to achieve a “magnified” effect, nor the first to use foreign objects to modify their playing, but they have adopted these methods and made the best of them. I suppose the cover photo, with its close-up image of pebbles, sand, and seashell fragments may be trying to say something about this magnification, this attention to detail, and the wonders we can behold if we stare at tiny objects. The key word in the press is “tactile”, attempting to communicate the very physical qualities that the writer finds in the “textural” music.

The longish track ‘Ammos’ on side B has moments where the music starts to cohere for me, suggesting that maybe a sustained dose of this difficult music is what’s needed for the full effect to start to infect one’s nervous system, but I realise that it’s not an easy feat to sustain improvisations like this for long periods. I hope they work together more to increase their confidence; Kyaness is too tentative for me, and somewhere the music lacks a personality, as if the players were concentrating over-much on keeping their poise and sustaining balance on a high-wire. It’s perhaps a good thing to concentrate on sound-production as a viable alternative to emphasising technique or musical production, but there’s not enough interaction going down in these mannered grooves, and the sounds they make are just not interesting enough. From 3rd August 2021.