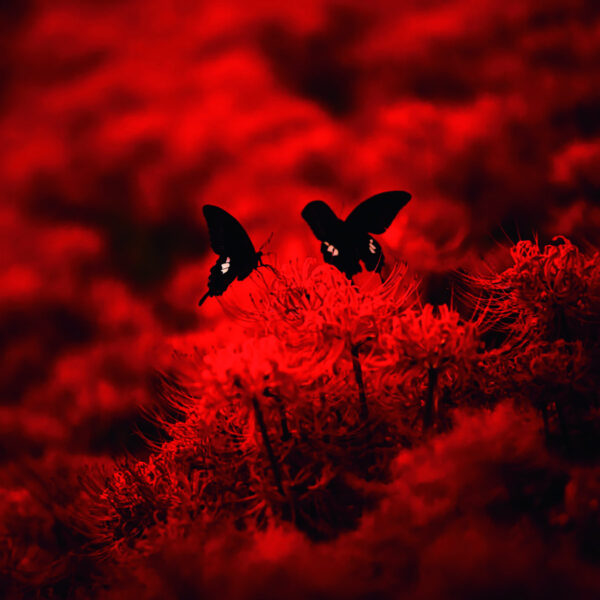 The front cover artwork of Ebola’s “Red Heaven” album featuring two black butterflies hovering over two blood-red flowers, and the entire background in a similar red shade, suggesting the fragility and beauty of life at its most moving and emotional before sudden death, got my attention and I decided to stay for the music. It turns out to be good, sometimes even thrilling post-BM / depressive BM with some slight background touches from synthpop and techno. Ebola is a solo DSBM project of Youta, a musician based in Oita prefecture in southern Japan, and “Red Heaven” is the project’s fifth album. Youta had previously played guitar for another Oita-based BM act, the four-piece Zxui Moskhva, until 2021 to concentrate on the Ebola project. Other members of that band play for Ebola live so the two acts obviously support each other.

Ebola’s style is a good, often powerful mix of raw BM that bristles continuously with pent-up anger and aggression, and the calmer, clearer melodic tones of post-BM with its pensive, wistful nature. The album begins solidly with “Lycoris Radiata”, a reference to the red spider lilies featured on the album cover and which traditionally grows around cemeteries in parts of Japan at the time of the autumn equinox, and the drama and power of that song continue into the next track “Cluster Amaryllis” which now includes raggedly shrieking vocals behind the noisily spitting tremolo guitars and the deep sinister bass. Keyboard melodies tiptoe around the guitars when they pause, adding some moody atmosphere and depth to the song.

As the album continues, the music alternates between the melancholy and despair of DSBM and the brooding nature of post-BM with plenty of sad, heartbreaking emotion linking the two sub-genres. “White Obelisk” and “Nostalgic Lily” open up a dark world of sadness, depression and hopelessness that may suddenly erupt into screaming, howling chaos and fury. A further dimension in Ebola’s murky sound universe is revealed in “Empty Voice”, an all-ambient piece of sadness, doomy atmosphere and quivering tension. Violent anger erupts in “The Fact”, where noisy tremolo guitars and screaming voice fight against a looming background of epic symphonic drone bass guitar. A resolution is reached in “Waiting” where the apparently happy-sounding trilling melodies (contrasting with the deranged shrieking) perhaps suggest resignation or even joy at destruction and death. The album closes with “Ending -Forever-“, a sorrowful solo piano elegy with synth ambient background.

Though Ebola doesn’t reinvent the wheel and the narrative behind the music is a path heavily trod by past generations of DSBM acts around the planet, this act does produce some very beautiful music even at its most harsh and desperate. The music is consistent in its song-writing and performance, and the energy and emotion flow well from one song to the next even though the music can jump from sheer anger to deep sadness and back again in the same track. The sound quality is nicely balanced between the raw fizzing aggression of the BM guitars and the meditative nature of clean-toned electric guitars in their post-BM / blackgaze guise. All songs are well written and express a wide range of contrasting emotions – usually anger or sorrow – that can be abrupt in their transitions. Of the eight tracks, “Empty Voice” is the most original in its brooding ambient drama.

I get the feeling though that the music seems a bit formulaic and aspects of Ebola’s style could have been shaken up a bit to produce even more raw and emotional music. The singing stays in the background fighting to be heard over the shrill and strident tremolo guitars. In later parts of the album a folk element, a little reminiscent of Ukrainian-style atmospheric BM with the epic symphonic bent, creeps in and this could have been an opportunity to bring in a more varied vocal approach as well instead of continuing with the screaming and vocal theatrics. After all is done and the album ends mournfully, my impression of “Red Heaven” is of a work that’s technically very good, even outstanding in parts, but missing that extra spark of originality that could have made it really great.