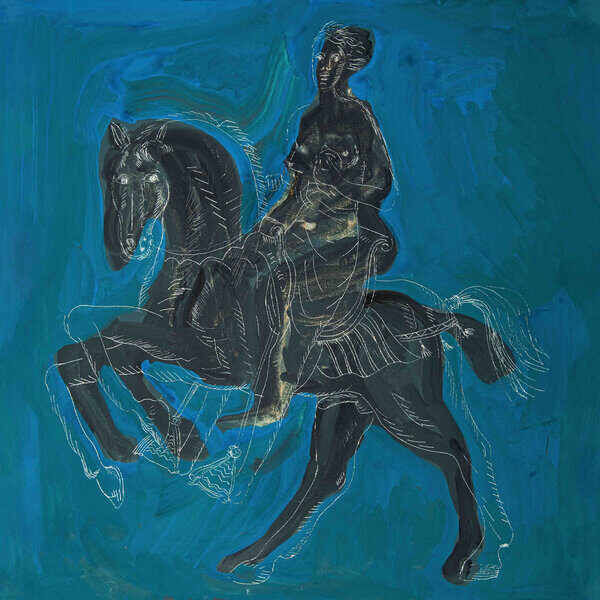 Welcome return of Alessandro Bosetti, the Italian polymath composer who has regaled us many times in the past with his dense and conceptually rich musical ideas. Quite often his approach has been a species of focussed rewriting or remaking of history, recasting sources into his own configurations to match his visions…whether those sources be musical, visual (he seems to be something of an expert on aspects of Renaissance art history), or textual.

This trend is detectable on today’s record Didone (KOHLHAAS KHS 018). On it, he’s more or less managed to invent a completely imaginary personality, and written the autobiography of this person in a lengthy poem composed of 84 “aphorisms”. Further, some of these aphorisms have been recast as music. All the texts are reproduced in the four-panel insert which is issued with the album, and are enhanced by the visual illustrations of Ettore Tripodi. While I can’t immediately translate the Italian texts, most of them are only one or two lines in length and I have the feeling I might be able to ask my Italian neighbour to help me out. One of them translates as “Try to be more limiting in everything”, a phrase of which Cage himself would surely have been proud. In any case, the drawings tell us quite a lot about the life of Didone. Especially poignant for me is the gigantic weeping face trapped inside the confines of a house; and I also like the puzzling image of the young man walking with crutches next to a dancing woman. He looks downcast and uncertain, she is full of the joys of life. A few hours spent in the company of this booklet and we might feel we are coming to know more about the unusual life and history of this Didone.

How was Didone caused to be? Answer – cut-ups. Bosetti was given a commission by the curator Riccardo La Foresta as part of a residency. The specification was that he compose music for a new small ensemble of musicians…four players from a jazz background, one minimalist guitar-banjo player, and the classical soprano singer Giulia Zaniboni. Bosetti sat down with all six of them and requested that they all tell him their life stories. Working to what I assume is his usual approach (i.e. consume and process vast amounts of information like a whale swallowing up shoals of fish), Bosetti documented everything and sifted through it, using a combination of careful selection and cut-ups to produce the story of Didone, in fragments and snatches. Of note: the interviews took place on Skype (guess why…and you can soon figure out when this was taking place); the material was carefully anonymised, suggesting that some of the contributions might have been pretty confessional in places; and the finished result was a “genderless” character. In today’s world where gender politics is a hot topic, this probably isn’t an accidental decision by Bosetti. This might be why Didone stands a chance of growing into some 21st-century “Everyman” figure, though perhaps one should say “Everyperson”…

What we hear on this extraordinary record is a lot of voices, often singing or speaking or performing with that strange form of song-speech which has long been a feature of a Bosetti project for as long as I can remember; he does it best himself, I suppose, and you can hear that on any Trophies record he’s made. But also the instrumentation is highly unusual, with woodwinds, guitar, banjo, and percussion, and the way these instruments are played is equally surprising, not easily defined as anything resembling jazz, chamber music, classical, improvisation, or any form of modernist music where vocals play such an important part. I say this as an indicator of Bosetti’s originality, even though you may put this record on and be instantly repelled by this seemingly chaotic barrage of loopy voices intoning with their weird intervals. The point I’m moving towards is that Didone is not simply a performance of the libretto which Bosetti has created through his cut-up method, but emerges as something more…the press notes speak of some process of “filtering”, as though the textual content changes as it passes through the voices. Further, the words and sentences aren’t delivered whole, but set forth in short phrases and fragments, often repeated or looped. Even more intriguingly, some of the imaginary biography is not expressed in words at all, but instead encoded in musical phrases; listen out for the dialogues that are taking place between the two drummers, and you may find that yet more information is passed into your receptors from this teeming mass of data. Like I said earlier, “dense and conceptually rich” are the hallmarks. I think the process that’s relevant is that the texts and the compositions have been tailor-made for these six musicians; from their own mouths, their own souls, it has been recast as music and fiction, and now here they are playing it back, repeating their own histories in avant-garde song and art music.

If it’s true that Didone is trying to make a point about “the reconfiguration and recombination of identities”, then Bosetti’s work has particular resonance at a time when society in general is continually moving towards a much more nuanced, diverse, and precisely-defined idea of what the “self” may be. Quite often this struggle involves a battle of words and semantics, sometimes leading to controversy and polarised positions, especially when it’s fought out on social media; but Bosetti is showing us one way out of that particular trap. It might be that this musical strategy could be applied to almost any mixed group of people, in any situation, with equally productive results. I get the sense it was very labour-intensive though, and it worked in this instance because the six players already knew each other, were artists, and probably felt confident enough about themselves and each other to engage in this experiment (to put it more plainly, they had a head start with some shared simpatico feelings). Even so, I’m trying to hint at the possible ramifications for Didone; in another parallel universe, it might take the place of clinical group therapy, and could work as a genuine solution for deep-rooted personality problems.