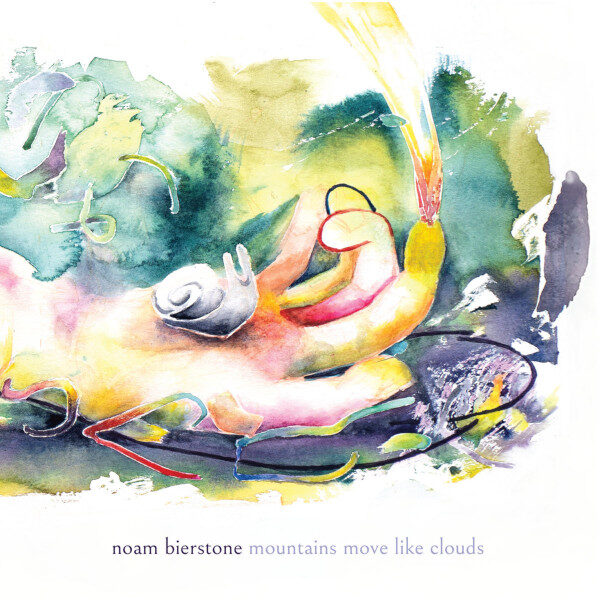 From Canada, we have contemporary percussionist Noam Bierstone who has a gift for interpreting the works of modern classical composers. Besides playing solo, he sometimes appears with scapegoat, NO HAY BANDA, and Architek percussion. On today’s record mountains move like clouds (NO HAY DISCOS NHD 001), there are just three demonstrations of his craft, indicating that he likes the long-form mode to properly explore these compositions.

For me the strongest piece is the opener ‘Message from the Lighthouse’ composed by the Berlin-Swedish genius Hanna Hartman (from the group Femmes Savantes), who is more often associated with electronic music. The score here calls for a rather unconventional approach to percussion, more about “probing” and “exciting sounds”, and evidently there is an extensive amount of preparation on the kit required too, making use of unusual objects and uncommon instruments. If we can take a cue from the title, the music here does certainly invoke attempts to send messages, faltering communications from a remote location, emerging at our end in almost broken forms and requiring us to put the jigsaw back together.

On the slightly shorter title track ‘mountains move like clouds’, specially composed for the occasion by Zeynep Toraman (a young Istanbul student working in Berlin just now), the performer seems to focus on bowed metal and other metal devices to produce very focussed high-pitched metallic drones. The press notes here clutch at terms like “ethereal glow” and “radiant vibration” to describe these static, resonating effects, and it can appear almost insubstantial with its vague, nebulous, qualities. However, there’s something to be said for the way the music almost “maps out” the mountainous terrain using the minimal music like some form of GIS system, with percussive strikes taking the place of plot-points. While it’s a long and slow climb, I like the intuitive and exploratory approach here.

The album’s centrepiece is ‘Mani. Dike’ composed by Pierligui Billone, Italian-born composer living in Vienna. Noam Bierstone has something of a history of working with this fellow, and in 2019 he commissioned the work ‘Mani. Amon’, a solo work which was scored for the large hand drum. The scapegoat duo have also appeared on a record dedicated to Billone’s work. The composer’s method seems to emphasise gestural movement more than anything, and what emerges on the 32:24 minutes is a wide assortment of rubbing, scraping, and churning gestures – at times it’s as if Bierstone were kneading dough or moulding clay. Several instruments – gongs, bowls, and sheet metal – are involved, and while you do get more sonic variety on the surface I’m finding this one less satisfying at some level, more like a catalogue of percussive methods and techniques than a complete composition.