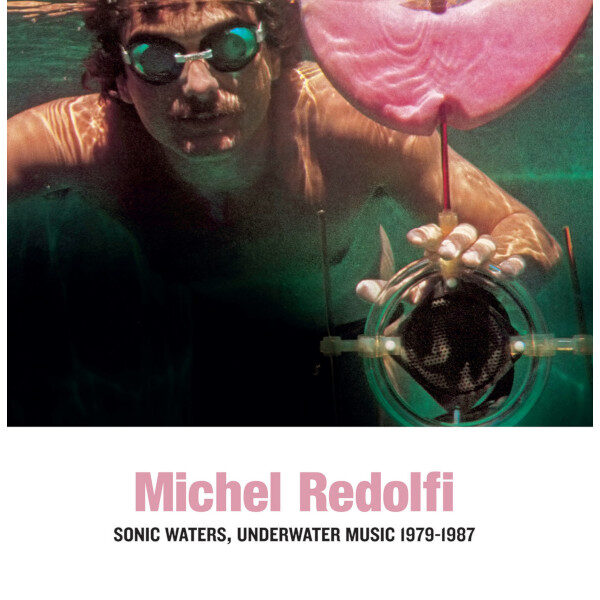 We heard composer Michel Redolfi in 2016 with his Desert Tracks made in the Californian wastes in the 1980s. We noted that he also made a lot of “watery” themed music when he left France to live and work in the United States, and today we have Sonic Waters: Underwater Music 1979-1987 (SUB ROSA SR493) which presents pieces from an ongoing project which began for him in 1978. Some of these pieces may have already appeared on the Hat Art LPs from 1984 and 1989, and there was also a 2002 CD on the French label Cezame.

Redolfi indicates at least two major factors in the development of this project – the first was the Synclavier digital synthesizer, which he bought in 1977 – the first model in fact, and presumably this tool allowed him the flexibility he was seeking. My understanding is that the Synclavier was regarded as cutting-edge sampling technology at the time, and embraced in the rock world by Peter Gabriel and Kate Bush, but Redolfi doesn’t go into much about how he actually used it, other than brief references to “digitally processed flutes and harp” in the early pieces. The second epiphany was the Pacific Ocean itself; he intuited quite correctly that it would serve as “the ideal experimental medium” for his Sonic Waters compositions, and he first did it in the sea off San Diego. Since then there have been a number of “concerts” given in the ocean or in the slightly more accessible realm of the swimming pool, a facility which I can only assume is very abundant and ubiquitous in California. Indeed the 2 July 1981 pool debut of this music took place in an Olympic swimming pool in La Rochelle, one month after the Diego dip.

Accordingly this album is divided into two suites, “Music for Fresh Water” from 1981 and “Music for Salt Water 1979-1987”, a division made clearer if you purchase the vinyl edition. In the performed versions, you could only hear this music by entering the water in the first place, and indeed a poster for a 1982 concert helpfully points out “swimsuits required”, while reassuring us that the water is nice and warm. One would like to know more about how this all worked. The photos of the swimming pool set-up show a large egg-shaped device which might be a waterproof speaker, and there are other speaker-like devices attached to the walls of the pool. Presumably the Synclavier music is emerging through these. But the process that’s most relevant is that we hear the music through “bone conduction”, rather than through the eardrums. This method of bypassing the conventional routes of the human auditory system evidently appealed to Redolfi. I’m also dimly aware that water can be regarded as a more efficient conductor of sound (I am now thinking of Gavin Bryars and his The Sinking of the Titanic), but this aspect of acoustic phenomena doesn’t appear to be in scope of the project. There’s also some marine life sounds on the “ocean” tracks, and Redolfi notes approvingly how “crustaceans and bivalves make the crowd noise of the concert”.

In all this work, Redolfi hoped to realise electronic music “within a liberating and futuristic experience”; partly motivated by a desire to get out of the restrictions of the concert hall. As to the “futuristic” aspect, the prospect of mankind being forced to live underwater is probably closer than ever nowadays thanks to climate change and global warming, but that’s probably not part of the composer’s agenda; instead, he explicitly invokes an earlier view of a fantasy Utopia, that of Francis Bacon and his The New Atlantis. We should also credit the flautist Lanie Goodman, harpist Melissa Morgan, and numerous technicians who assisted with computer synthesis and the realisation of the live recordings; plus Jon Appleton, who invented the Synclavier.

An uplifting and optimistic record; while not as tough and austere as the Desert record, it’s hard not to be seduced by its sumptuous surfaces, and the music succeeds in its aim to “immerse” the listener. Any fears of vapid “New Age music” will soon evaporate as you dive deeper into this subtle and complex music. From 25th October 2021.