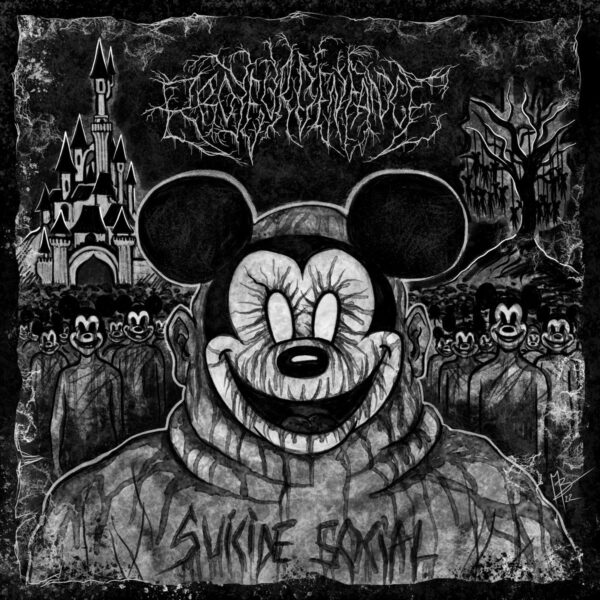 Living in a society where pursuing happiness, comfort and security has been twisted by for-profit corporations and even governments into a tool to enforce conformity on people, brainwash them with propaganda masquerading as education and entertainment, and force them to compete against each other in a never-ending grind of work to pay off debts accumulated for things essential to our survival, we can well sympathise with French solo DSBM act Broyeur d’Enfance (“Childhood Grinder”) on his second album. “Suicide Social” plays like a tortured confessional of Zémus, the man behind Broyeur d’Enfance, who realises that the world around him, filled with false promises of fame and money and happiness, has bred a society and culture where everyone wears masks of false happiness as they climb over or beat each other into the ground in order to reach those goals. For most people, failure rather than success is the result, and getting out of the daily grind after years of effort is impossible. Disillusionment and depression may follow, and for too many people suicide is their only escape.

For “Suicide Social”, Zémus (with the help of a session drummer and a couple of other musicians on specific tracks) lays out a highly varied and eclectic if manic musical soundtrack opus that’s hardly anything like what you’d expect of a DBSM album: various spoken word recordings and other sampled sounds are essential materials among others picked up and spat out by this musical shredding machine based around a core melodic and emotional BM style topped by Zémus’s theatrical shrieking vocals. Guitars wail and scream, and percussion bangs away as if literally throwing itself against the wall. The keyboards provide an unexpected ambient wash drone counterpart to the strings and skins, with soft, sometimes nauseous tones threaded through the music, and bring a lush quality and rich drama to the music. A couple of short pieces “Funérailles de ma Blonde” and “Mourir sur Seine (Ode a la Solitude)” are straight-out instrumental ambient pieces of deeply atmospheric beauty and lushness. These moments of calm are all too brief though in an album where songs are hurtling to the edge of a cliff with shrill hysterical guitar riffing and a never-ending tirade of ranting and screaming vocals.

The album divides into three parts with the first three tracks detailing Zémus’s state of mind as it deteriorates under pressure from outside and alcohol. Middle tracks “Funérailles de ma Blonde” and “Les Larmes de Christine” are a homage to American TV news reporter Christine Chubbuck who killed herself with a shotgun during a live news broadcast in 1974. The last three tracks return to Zémus contemplating suicide with the final track (the title piece) descending into mad (and maybe overdone) grief and lamentation, with musician Rat Crevé’s accordion detailing Zémus’s final collapse into psychological hell. While songs can feature abrupt changes in pace and music, pausing for a spoken voice sample to pass by before jerking back into jagged guitar action, the general presentation is tight and well done with Zémus fully in control of the musical proceedings if not his state of mind.

A very deft and well-crafted work, “Suicide Social” is best heard as a soundtrack to a personal descent into anguish, torment and hell from the pressure and strain of having to live a lie, of its protagonist pretending happiness in spite of being depressed and feeling suicidal. The music, mad and frenzied as it often is, is fully immersive with layers of sonic depth and atmosphere that draw listeners deeper into Zémus’s personal maelstrom. The short ambient instrumentals bring unexpected moments of peace and serenity, and the use of keyboards add layers of rich ambient beauty to otherwise jagged and often harrowing music. Some listeners might find the album and the vocals over-the-top theatrical, but the histrionics fit a narrative of increasing delirium and madness in a world abandoned by sense and becoming a giant mental asylum ruled by its inmates.