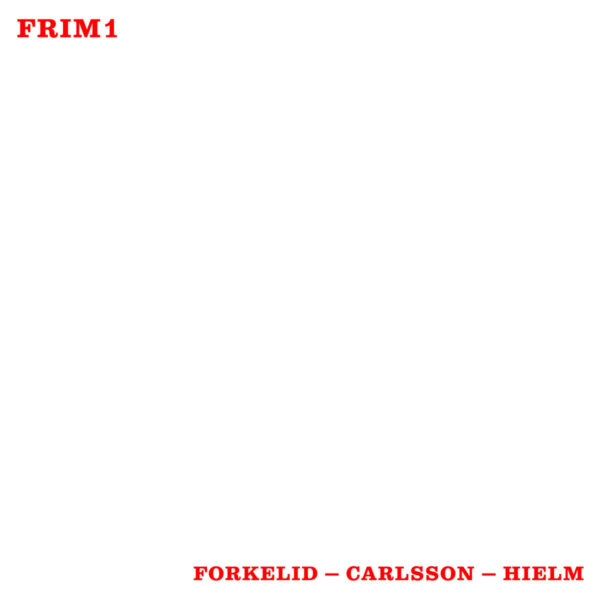 Can’t Hide (FRIM RECORDS FRIM1) is a nifty free-jazz blurt recorded in Stockholm just on the cusp of the international lockdown movement, and it might be that the title foreshadows the very inescapability of the virus from which none of could hide…and some sensitive ears may even be able to detect notes of uncertainty and panic creeping into the frantic, side-long performances here. What’s more noteworthy is that lead soloist and sax-wielder Elin Forkelid is a woman, and thus injects a welcome gender balance into a genre or field that has been exclusively male for some time.

Elin is a relatively new player and I see she’s appeared on records by the Oya Sextett, Sol Sol, the Anna Hogberg Attack, and Agnes Persson, plus she found time to make Plays For Trane in 2020 for a Swedish label; never heard it, but in tune titles and cover design it does seem to yearn to express an affiliation with the spirituality of John Coltrane and some of the precepts of 1960s free jazz, through the portal of Reid Miles cover designs for Blue Note. She’s blowing here with drummer Erik Carlsson and bassist Gustaf Hielm; while Carlsson has tended to drum in more traditional improv and jazz contexts, it’s kinda interesting that Hielm also plays extreme metal, for instance in Pain Of Salvation, a Swedish progressive metal unit active since the mid-1990s. You can hear Hielm’s rock tendencies leaking out on this record, particularly on the first side, and not just because he plays an amplified electric bass – he also can’t resist injecting moments of aggression and energy.

Elin Forkelid herself has a more complex and ambiguous tale to tell, and to my mind it’s on Side 2 with ‘Can’t Hide (Answer)’ where she gets down to some serious explorations intent on expressing the chaos in her bones. And if it isn’t chaos, it is at least shot through with emotional honesty and self-expression. The trio do tend to follow a predictable rise-and-fall structure in a way that still seems to blight free playing around the world, so they have to slow down now and again to stare off into the distance, but during the very pro-active “energy” passages they deliver a pretty solid bowlful of dough laced with active ingredients. Fellow Swede and big-man-on-the-improv-campus Mats Gustafsson is unequivocal in his praise for the event, peppering his rave with excitable sentences like “It is all THERE! Throw yourself in! Just go with the gushing flow of an extremely emotional and spiritual experience”. He also throws in a handy “swimming” metaphor to remind us of the benefits of upstream swimming (an aphorism he learned from the pianist Per Henrik Wallin), as if the human race were all fish, who would do better to develop the requisite muscles and swim against the current.

The word “swim” just happens to rhyme with FRIM, which refers to the Swedish Association for Free Improvised Music; they organised the concert, and this is the first release on the label which they recently created. Interestingly, the FRIM organisation has been around since the mid-1970s – reports of its actual date of foundation vary from around 1976 to 1978 – a time which is more or less coincident with other labels and organisations actively promoting free improvisation, such as Free Music Production and Incus / Company. Not unlike those labels, FRIM have opted for an all-typography cover for this vinyl release. From 8th November 2021.