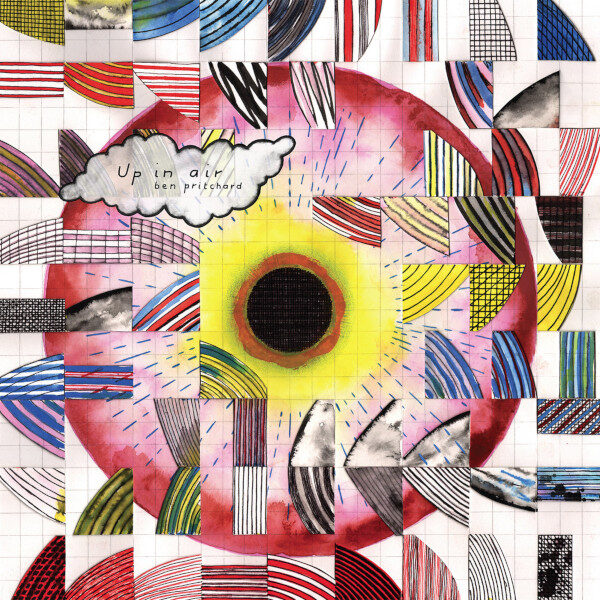 Ben Pritchard here with a double ten-inch of his songs released on Philippe Delvosalle’s Belgian label Okraina, who some time ago regaled us with a number of song-based releases, including singers inspired by traditional European folk music as well as venerable American beatnik songsters such as Ed Askew and Ed Sanders. Pritchard used to be the guitarist in late incarnations of The Fall and has a history of leaving the band on numerous occasions (it was an exceptionally turbulent period of Mark E. Smith’s reign), but he stuck around long enough to appear on such classics as The Real New Fall LP and Are You Are Missing Winner.

None of that Mark E. Smith abrasiveness has rubbed off on him though, going by the evidence of Up In Air (OKRAINA RECORDS #16); it’s all acoustic, performed and sung mostly by Ben and his guitar, with the help of Otto Willber on bass and Sholto Dobie on the table organ. The songs are slow, lugubrious, the lyrics full of wistful longings; any melodies which might come our way are extremely limited in their melodic reach, so under-nourished as to be almost evanescent. To his credit, Pritchard manages some unusual sounds with his lo-fi, stripped-down set-up, and makes his strings and percussion produce some very expressive scrapes, the better to manifest his mournful and despondent emotions. There’s also a certain honesty in the very plain recording production; no effects added anywhere as far as I can tell, and he resists any temptation to add compression or reverb to beef up these wan and sickly sounds. This honesty has extended to the manner of the vocal recordings, which reveal every nuance of his reflective soul; they also expose a lot of his voice’s shortcomings and its limitations.

All of this tends to make Up In Air a rather “conversational” record rather than a comprehensively musical experience, and the lack of variation across these ten tracks makes this release quite a moody “downer”. As a songwriter, Pritchard may lack the opacity or invention of a Will Oldham, but sonically he’s in the same neighbourhood. Recorded in London and Vilnius. Sleeve art is by Gwenola Carrere. (02/12/2021).