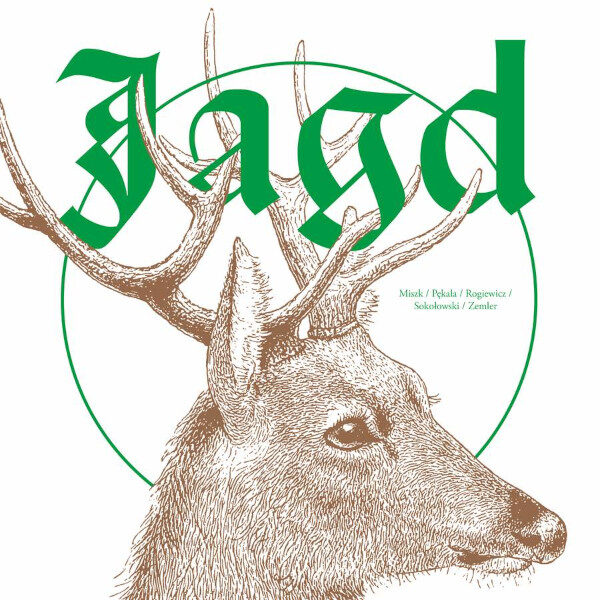 The album is a conceptual statement about hunting animals; the four tracks point directly to four specific beasts, the black grouse, the fox, the rabbit and the doe, and inside the LP you’ll find a double-sided insert of text on the subject penned by Marcelina Obarska, titled “A spell against ecstasy”. She starts out with a paragraph on Saint Hubert, and works her way through many a thicket of philosophical and political ideas in support of her proposal. I don’t suppose any of us reading this are in favour of hunting animals, but Obarska does attempt to address some of the deep anthropological urges that made humanity want to hunt in the first place, before spinning off into radical vegetarian politics and some opaque ruminations about magic and ecstasy. Saint Hubert’s story is much the same at Saint Eustace; he had a religious epiphany when out hunting, and saw a crucifix appear between the antlers of a stag. The stag spoke to him. The event made him lay down his crossbow, and ever since Hubertus has been adopted as the patron saint of hunters, and the source of “ethical behaviour” among those who hunt. Obarska takes issue with that, as she does with many other examples of modern thinking that fall short of her standards.

At least there’s zest and fire in her fraught polemic, qualities which you might not find in the music when you spin Jagd; indeed the team here seem to be aiming at something as constrained and cryptic as possible, almost hermetically sealed. Although the first track does have a lilting percussion framework in the mode of Steve Reich which is vaguely uplifting, the remainder of the album is gloomy, almost lugubrious, and offering little warmth or succour to the perplexed listener who might be trying to connect these dessicated post-modern drones to some recognisable representation of the animals, or their plight. Even so, there’s a dour insistence to ‘Krolik’, for instance, which is pretty hard to ignore; its extreme melancholy whines its way into your fabric and won’t go away in a hurry. Also, the overall sound of the music is very distinctive. Miszk’s trumpet is foregrounded, which isn’t to say it’s the “lead” instrument taking solos, but he issues plaintive bleats that might, although several steps removed from reality, be substituted for the cries of a wounded animal. Pekala’s percussion is also strong, particularly the vibrpahone work. Rogiewicz has a moment to shine on track four ‘Lis’, when he peals off an ominous bass drum rumble that could be heard as an apocalyptic thunderclap at the end of this half-suggested story. The piano and balafon are also called on, but only to appear as sketched-in features in the landscape (trees, rocks) in this pastoral arena.

Far from a pleasurable listen, but there’s still something compelling about the sinewy core of this music, and I can buy into about 30% of Marcelina Obarska’s far-fetched ideas. I see this is part of a series called TAL – possibly the first entry – which is curated by Barbara King Majewska. I remember Majewska was the brain behind the exceptional record Taratil Id Al-Milad which was also produced for a Polish label; she devised the concept and sang the songs to articulate it, and though the music was tough going, the album was informed by a social conscience and a strong sense of ethics as it addressed the hot topic of refugees and immigration, through the metaphor of the Christmas story as inscribed in ancient carols and folk song. It was a record that wouldn’t let the listener off the hook very easily, and I detect some of the same won’t-take-no-for-an-answer spirit on today’s record. It may take a few spins and a bit of reading to untangle the skeins, but once you do I am sure you’ll learn something about the nature of mankind, and you might not like what you see. From 29th November 2021.