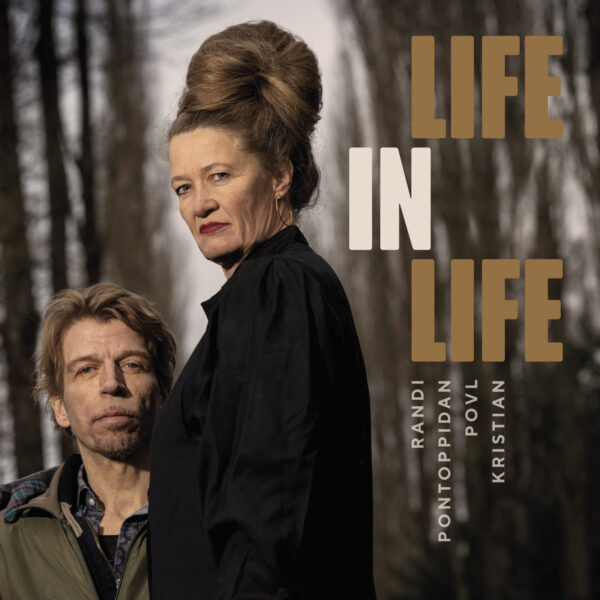 A beautiful and very emotional recording made by a singer and a pianist performing together – not going note for note but travelling their own paths in parallel yet at all times presenting as one entity – this is “Life in Life” from virtuoso singer Randi Pontoppidan and pianist Povl Kristian. Kristian plays his instrument very minimally but subtly, with no flourishes, just the bare melodies – and yet his style is very gentle and sensitive to changes in Pontoppidan’s singing. Hmmm, perhaps “singing” isn’t quite the right word to describe what Pontoppidan does with her voice: blessed with a tremendous multi-octave voice and the flexibility and extended singing techniques to match, Pontoppidan is Denmark’s reply to similar avant-garde / experimental vocalists like Diamanda Galas, Joan La Barbara, Iva Bittova and Maja S K Ratkje.

Most songs on the album are short – only “Crossing the Rubicon” and “Ocean of Bliss” exceed the four-minute mark – but it may be that their very brevity and sparse delivery bring you close to Pontoppidan, allowing her to take you on her journeys through each and every song. Completely absorbed in her … erm, singing, Pontoppidan will hold you spellbound as she chirps, warbles, sighs, trills, hums lullabies, mutters and gabbles to herself, and imitates birdsong. Kristian’s piano playing gently nudges you along and provides comforting support as, mesmerised, you find yourself drifting along with Pontoppidan’s voice.

Pontoppidan and Kristian work very well together: by pursuing their parallel paths, they don’t compete with each other but rather complement each other and retain their own musical identities. The album comes across as gentle, easy on the ear and smooth if unconventional for a jazz record – yet it has an intense emotional power and much dark subtlety. There seems to be a lot more the two Danes are hiding from us than is apparent on the album, and you’ll find yourself wishing that they come back for a follow-up album so that they can reveal a few more secrets through their collaboration.