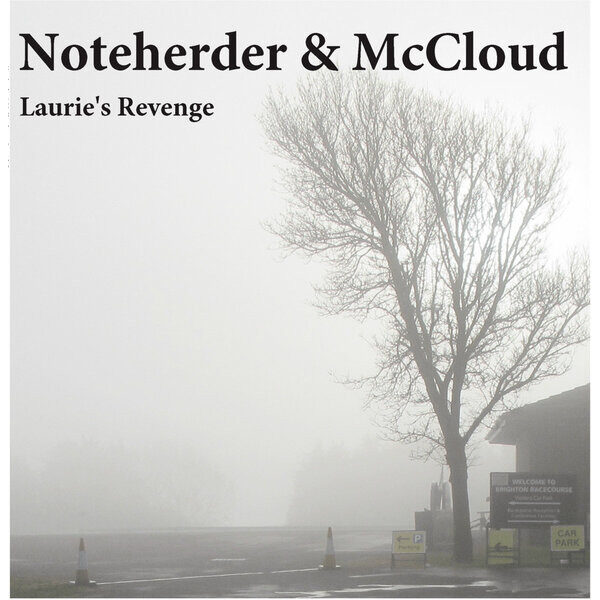 “For once it’s not a live recording”, writes Geoff Cheesemaster as he sends me Laurie’s Revenge (SPIRIT OF GRAVITY GRAV144), the October 2021 release from my favourite woodwind-and-electronic combo of Brighton, Noteherder & McCloud. Geoff is referring to the fact that they’ve made a studio record, possibly for the first time in their career…so they experimented with overdubs, multiple tracks, multiple instruments, and generally “work more as other folk do”, as they rather modestly put it. The resulting 5:17 mins of the ‘Original Version’ may lack the aggression of some of their live situations, but it compensates by rewarding your cold ears with a thick, autumnal fog of abstract and unnatural sludge.

For the flip side, they recruited upstart Spheress to make a remix; this “young electronic producer” has also released a record for this same label, the four-track EP A66, notable because he made all these tracks aged just 15. Supposedly, he likes ambient, noise, techno, and glitch, and his contribution to this particular project has been to deepen the overall murk of the original track, and add beats. This ‘Jazzless Jazz version’ has the unexpected effect of dragging Chris Parfitt and Geoff Cheesemaster – or at least fleeting impressions of their ghosts, projected from 50 yards away – into the unlikely milieu of the dancefloor. In creating this version, whipper-snapper Spheeres has extended the duration by a whole three minutes. It’s possible that some of the original’s menacing vibe has been subtracted – I especially like the “shouting” of N&M which emerges as animalistic growls and grumbles at the start of their episode – but it’s also possible that Spheress has somehow zeroed in on precisely the right moment of juicy bloodletting, and simply put it into a looping situation where we can experience these seconds of agony for a much longer period. To put it another way, N&M’s predilection for discursiveness has been curtailed, in favour of pushing aspects of their music into a more focussed and compacted statement. If our teenage prodigy can develop this approach even further, there’s no telling what may happen next.

This was another lockdown project by the way – it was the want of live gigs that pushed the duo into the studio in the first place. From 1st October 2021.