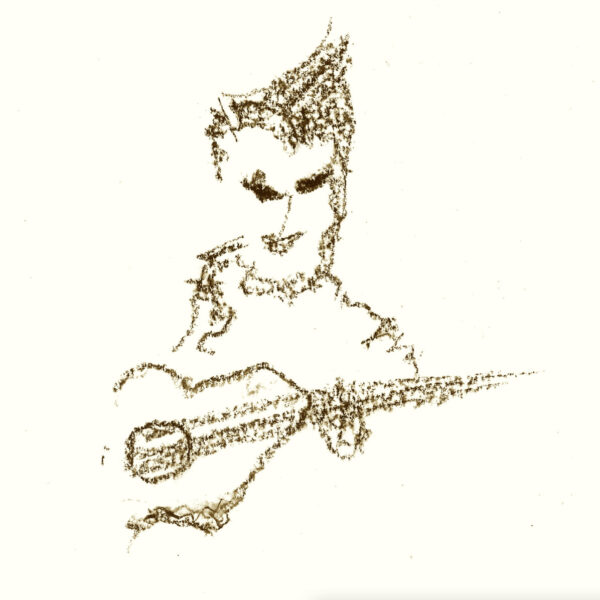 Usually we don’t review items if they don’t have a physical release in the form of a CD, CD-R, cassette or vinyl record but I’m making an exception for this compilation of songs due to the exceptional circumstances that led to its existence. Before Christmas last year, Penultimate Press man Mark Harwood streamed a film on the stremio app for some simple fun and chose to watch Baz Luhrmann’s film “Elvis”. Harwood and a friend saw only 15 minutes of the film before stopping the streaming – not surprisingly, Harwood describes the film as “horrible” on the PP Bandcamp page but what else do you expect from a Baz Luhrmann film apart from gaudy rubbish? – but not before a bot attached to Warner Bros. Pictures detected what Harwood had done. Harwood ended up with a heavy fine over €900 on Christmas Eve. He sent an SOS to musician friends for help in paying the fine at short notice and to find a silver lining in this sudden cloud over his head, and this compilation of original songs about or dedicated to Elvis Presley and his legend, or to Harwood’s predicament is the result.

Over 25 musicians rallied to the call with pieces ranging from ambient, noise and musique concrete to acoustic improvisations. Considering the short notice they must have had, the artists have delivered excellent work and many songs are very funny and witty. I must admit to laughing out hard at “Elvis en Hawaii”, with its queasy drone tones, wandering tune and snippets of Presley’s utterances, from Alvaro Daguer and Nicolás Godas. Electronics artist Arek Gulbenkoglu leaves us in no doubt what he thinks of Baz Luhrmann’s contributions to film art and culture in the noisy raspberry-blowing track “Bazz 666”. Having seen a couple of Luhrmann’s films in the past, I must say I agree with Gulbenkoglu!

While the album is quite long, most songs have a light touch and I found all of them easy on the ear and quite accessible, even though they can be quite eccentric. (Rashad Becker’s “the king and i” perhaps being the oddest of the lot in mood as well as choice of weird sounds and melodies.) Contributors to the album come from a range of music genres, though there is an emphasis on improvisation, and not many tracks feature samples of Presley’s songs. I must confess to knowing only a few of the artists who pitched in to help Harwood in paying the fine, with Francis Plagne, Dean Roberts, Oren Ambarchi and crys cole being among those who helped out, but the majority of artists featured here have produced hilarious tracks brimming with energy and witty commentary on Elvis Presley as a cultural phenomenon and the continuing commercial exploitation of that phenomenon and legacy.

Having survived his brusque encounter with the merciless Hollywood money-making machine, I am hoping that Mark Harwood has learned a valuable lesson (?) and is sticking with tried and trusty independent film directors like E Elias Merhige, Gaspar Noé or Ruben Östlund.

The album is dedicated to Lisa Marie Presley who died on 12 January 2023, just a few days after what would have been her father’s 88th birthday if he were still alive.