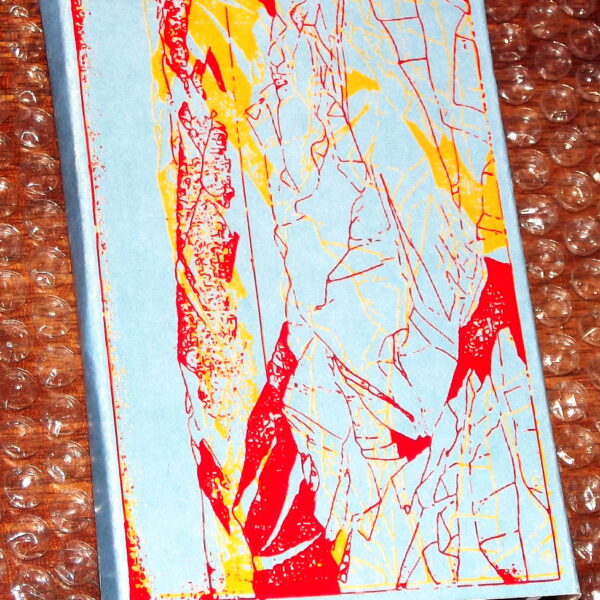 Thought Forms are the trio of Romijn, Dhariwal and Metcalfe, playing a delicious form of acoustic trance music on their cassette Sorry I Forgot (LF RECORDS LF024). It takes a special kind of restraint to keep performing at this glacial pace, only allowing minimal and plangent notes to ring out as needed across a delicately-spun pattern of gossamer music. The languorous violin (?) tones are especially pleasing; one might almost say other-worldly. The musicians describe their work as “plowing a rural idyll through a landscape of feedback, strings and ghost axe”, evoking a pastoral scene whose serene vista is only slightly tinged by the spectral appearance of a supernatural presence. Very good; look out for their LP on Invada Records, which was forthcoming when this was released. (24/07/2012)

From the people who brought us Bob Hallucination in March 2012 comes another marginal and unclassifiable spooker, Spark I (INTANGIBLE CAT CAT-15) by Amalgamated. This affiliation of Illinois musicians – Bengsten, Newell, Richards and Klampe – regularly meet to spark up a few electronic and rhythmic improvisations, and afterwards have the taped results reshaped and refitted into new configurations by D Petri and Gus Kumo. The music thus produced is hard to pin down, deliberately flitting across stylistic approaches and multiple genres, while the players wear a mask of passive inscrutability the whole time. It might be that too many bands wish to be characterised as “mysterious”, but I think we can make an exception for Amalgamated’s odd work, which feels very honest and genuine to me; they are not straining hard to project a visage of the impenetrable outsider. Their approach really pays off on the baffling track ‘A Wedge Of Raging Cygnets’, which flows from a romantic piano fugue into a jaunty instrumental that feels like a loop from a Country & Western record filtered through a psychedelic mind-strainer. Nice production values on this three-incher; their logo is a cut-out appliqué vinyl sticker.(22/08/2012)

Hidden gem of the week: the Manchester improvising guitarist David Birchall, whose one-take directly-recorded improvisations are splendidly presented on his Acoustic Textures (BLACK CAT PRESS 002) collection. Birchall is of the school of those who insert objects into acoustic instruments, building on the prepared piano notion, but his technique is to play the inserted objects as much as he plays the guitar, allowing the soundboard to act as a natural amplifier for his multiple – erm – interpolations…what I enjoy is the spirited bounce and snap of his playing attack, suggesting strongly he’s not one of these self-satisfied aesthetes who invite us to admire the sumptuous resonances of their vibrating bowls or shimmering saucepans used as percussion. He does seem to be more about the physical sound he creates, rather than a muso improviser indulging their over-crafted technique. Visual representations of the objects used in this performance are provided in the mini art booklet, where Birchall has co-opted Max Ernst’s frottage technique to generate strong monochrome images. Excellent. (23/08/2012)

I am very keen on the Italian band St.Ride, the duo of Grandi and Gusmerini who have produced superb instances of fractured and abrasive electric beat music, which they term “alienated urban electropop”, and who have a strong line in Marxist-informed critiques underpinning their lyrical content. For Quando Arrivo Arrivo (NIENTE RECORDS VOLUME 10), a deliberate effort is being made to sweeten the deal somewhat, and the album ends up as a suite of 11 songs almost resembling pop music, with minimal and erratic tones laid over lumbering beats, and the vocals subjected to some sort of radical subtraction process that bleeds away about 50% of the voice’s phonemes and destroys 90% of the song’s meaning. “The tracks walk on precarious balance”, is their proud boast. While this isn’t the sort of music that’s in danger of achieving serious chart action, it has a less harsh surface than previous releases and may succeed in drawing many fun-loving flies into its sticky web. But watch out for the treacherous slopes and hidden trap doors in this particular crazy house. Tricky, intricate, itchified music, guaranteed to slip a few breadcrumbs under your rhinoceros hide. (28/08/2012)